Home TechnologyProducts What Is the Difference Between Airborne and Air Assault? (Detailed View)
ProductsTechnology

What Is the Difference Between Airborne and Air Assault? (Detailed View) 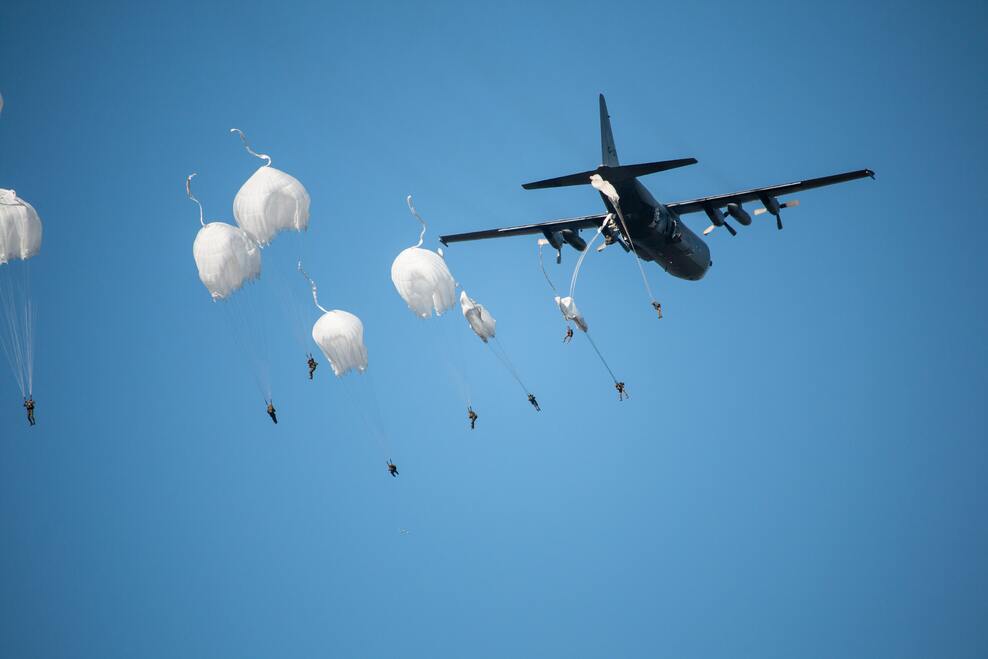 In the history of wars, an efficient way of getting a better position over the enemy was to move troops straight to the battlegrounds.

The utilization of motorized vehicles did not begin until the 20th century. Since then, helicopters and planes have been the foremost way of infantry forces in combat, and by far the most economically expensive.

The talk about airborne and air assault has been around for a long time. Both have their respective pros and cons which might or might not outweigh one another but both have been a huge part of offensive combat operations throughout history.

If you want detailed information, then continue reading.

Airborne forces are Ground troops carried by aircraft and then dropped into the Battle-zone directly with only a parachute attached to them. Paratroopers are the parachute-qualified soldiers who serve in airborne forces.

Airborne forces lack the required supplies for combat that extends for a longer time. Hence, they’re mostly used to bring in heavier forces and other combat objectives are executed later.

Airborne forces may also use a parachute with a static line that’s attached to the aircraft and which opens when exiting from the aircraft.

Airborne forces do not require a landing zone as the aircraft does not land on the ground rather the ground forces do.

So, as long as the airspace is accessed the airborne forces can carry out their required operations more efficiently.

Due to the slow descent of the paratroopers, they’re a target of enemy fire from the ground.

Airborne operations are also more vulnerable due to weather conditions which may prove to be dangerous to paratroopers.

What Does Air Assault Mean?

Ground-based military forces are moved by Vertical and take-off and Landing Aircraft (VTOL) – mainly a helicopter to capture and hold areas that have not been secured and to get behind enemy lines. Air-assault units receive rappelling and fast-rope techniques training as well as regular infantry training.

In other words, air assault is utilized to deliver the troops straight onto the battlefield.

Air assault has 2 methods for deploying units, the first is Fast Rope Insertion/Extraction and the other is when the helicopter lands on the ground and the troops jump out. Air assault is more suited for combat insertion rather than just transportation to the required area.

The first airborne assault mission was conducted by the United States in 1942 during the operation “torch”. 531 men who were a part of the 2nd battalion, 509th of the parachute infantry had to be flown over 1600 miles with the intent of capturing two airfields, they flew over Britain and Spain and dropped near Oran. It was an invasion of northern Africa.

Navigation and distance almost ruined the airborne spearhead’s operation. Planes got lost, and some ran out of fuel. Some planes dropped paratroopers far from the objective area and some had to be air-landed.

The results of this Operation were disappointing but this would not stop future invasions and the vast use of airborne units.

In the aftermath of Rwanda’s hard-fought civil war and the mass genocide which came with it, some 650 UK personnel from the 5 Airborne Brigade decided to become a part of the UN Assistance Mission to Rwanda (UNAMIR) as part of Operation GABRIEL.

Ferocious close-quarter fighting expanded as the paratroopers continued the advance through a sewage farm and cemetery nearby, rolling up Egyptian coastal defenses. Covering fire was used to support the amphibious landings that arrived the day after and an effective link-up with 45 Commandos was achieved.

Two paratroopers had to land near the sea and then advance further down the canal and dug in at El Cap. This was the end of the Task Force’s advance as World pressure ended this controversial campaign.

The three paratroopers’ parachute insertion had meanwhile imposed a decisive defeat on the enemy at the death of four or three officers and twenty-nine men were wounded.

Air mobility has been a concept of transportation in combat since the 1930s. The first Air Assault mission was carried out during the Korean War in 1951.

Named “operation windmill” IT was carried out by the United States Marine Corps to support a battalion clearing the ridges of an extinct volcano from the enemy.

During the Algerian war, the Air assault units were utilized to drop French soldiers behind the enemy line, this gave rise to airmobile warfare tactics which are still used today.

A considerable number of missions were carried out by the French military against the insurgents.

The most innovative tactic created by the United States army was their Air cavalry which was used against the enemy in Vietnam– the Infantry was deployed via helicopters into combat to counter the elusiveness of the enemy.

The objective of the infantry was to get close to the enemy through gunfire and maneuver in order to capture the enemy or repel the assault.

On 15 June 1965, the defense secretary approved the inclusion of airmobile into the army force. This was the designation of the 1st cavalry division. The first Air cavalry division was trained when it arrived in Vietnam in 1965.

Their objective was to survey for large field commands and participate in stability operations and provide security over the population.

The 1st division cavalry was an organization of 15000 men. Combat of air assault was much more than the mere transportation of troops on the enemy ground. When the enemy was located, the troops were swiftly deployed via helicopters to the concentrated part of the battle.

Both Airborne and Air Assault use different aircraft and helicopters to execute respective tasks. Airborne units use huge aircraft. Keep in mind that they do not possess the capabilities of vertical landings but generally have higher speeds through the air. These aircraft are built for long-range flights (similar to a normal airplane).

These aircraft need a larger area of runway to land on the ground because they can’t vertically land. They reach the desired locations faster than a helicopter and since they do not need to land on the ground, they hover above the location while the units are deployed via parachutes and in this time the aircraft is subject to enemy targeting.

These planes carry cargo that is to be deployed by parachutes as well.

The Air Assault units use helicopters and choppers for operations. These aircraft possess the capability for vertical landing since they use vertical propellers. Their vertical landings are the biggest edge, they allow them to lower on the ground once above the required location.

These aircraft also carry sling loads which are also called cargo. They have slower general speeds but they move quickly while deploying cargo and they can land swiftly on the ground. They’re not targeted much compared to airborne aircraft.

We can conclude that both types of Airborne warfare crafts serve their respective purposes depending on the situation as the Air Assault excels in carrying and deploying forces to the ground. Meanwhile, the airborne units can be deployed swiftly and sneakily behind the enemy lines.

My take on this is that airborne is better as it is a sneaky and pesky approach to an enemy’s camp. whereas air assault is a more war-like approach as it consists of free-falling into the war zone which could be fatal and more lives would be taken of men.

The silent and soundless approach of Airborne would save more lives. On top of that, these operations can be operated in the morning and night depending on the enemy’s location.

One of my favorites is the B-2 Bomber which is a stealth bomber that is used for penetrating through the enemy’s air defenses without them knowing it.

I hope this article became a great source of knowledge for you in terms of the differences between the two. We also have some more articles in this niche if this is something that excites you, so be sure to check them out as well.