Home LanguageGrammar At Least or Atleast? (One Is Grammatically Wrong)
GrammarLanguage

At Least or Atleast? (One Is Grammatically Wrong) 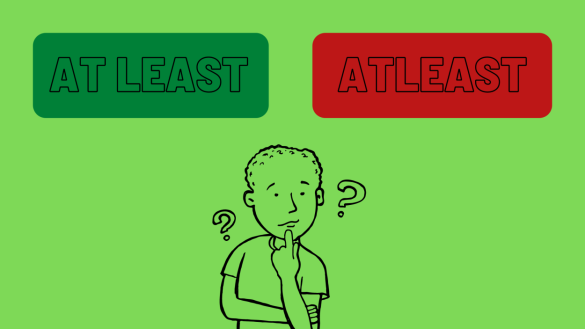 One difference will make something right go wrong. It feels embarrassing when spelling or grammar mistakes occur, but this is inevitable at times.

The best approach to this is to study what grammatical mistakes are often made to avoid them — and that’s what you’re doing now, so good job!

Now, get ready to stop using one of the most common grammar mistakes.

Is At Least Grammatically Correct?

At least is grammatically correct while atleast is incorrect. It’s common for people to make the mistake of not adding space to refer at least. This is typical because it’s often heard in conversations rather than written down. Thus, a misconception arises as some people think at least is one word.

Other Phrases That May Be Used as One Word

At least is right and atleast is wrong, but everyday and every day are both proper. Phrases that are also used as one word have subtle differences. In this case, everyday is an adjective, while every day is an adverb.

Here’s a table for you to see other examples:

What’s The Etymology of At Least?

The phrase originates from least’s Old English word læsest. It’s defined as “the smallest or lowest position.” Using læsest for conversations today isn’t ideal since it’s rarely used, but there are still creative ways to use it.

A great idea would be to use læsest when writing a story that occurred in the past where it’s often uttered.

What Does It Mean When Someone Says At Least?

At least is defined as the lowest amount allowed. It’s generally used when you say something shouldn’t go lower than the amount you stated. An example would be, “This shoe costs at least $100 when you buy it online.”

If you want more emphasis on your statements, you may try to add, at the very least.

However, you should know that there are other uses for at least.

According to Cambridge Dictionary, at least has two other definitions:

More Examples of Sentences That Uses the Word At Least

Meaningful examples indeed help you understand a particular topic even better. So here are additional examples of sentences that use at least:

In this sentence, Leonard tells us that he’ll be able to pick the right color if they give him time to choose. At least is used here to indicate that 5 minutes is enough for Leonard to accomplish this task.

Particular games require two or more people to be played. In this example, Allan used at least to explain that the minimum number of players needed for their game is three.

This statement implies that going to the store from their location would take 30 minutes without traffic. It answers the question, “How long does it take to go to the store?”

What’s Are the Synonyms of At Least?

What Are the Antonyms of At Least?

What Type of Phrase Is At Least?

At least is an adverb phrase. This type of phrase is simply a group of words that function as an adverb—it’s used to replace adverbs.

Here are a few sentences that contain an adverbial phrase:

There are different types of phrases. You can watch this video if you wish to learn more about them:

Use at least because atleast is grammatically wrong. At least an adverb phrase that means “the lowest amount allowed” came from the word læsest. This phrase is often used to indicate that any amount lower than what’s said won’t be accepted.

Don’t get the wrong idea. Just because atleast is considered grammatically wrong doesn’t mean everyday is also a mistake. Everyday and everyday are both correct, but they’re used differently. There are other examples similar to this so be careful to avoid misconceptions.

If you want to avoid common grammatical mistakes like atleast, it’s ideal to constantly improve your grammar skills. This will allow you to not only alleviate typographical and grammatical errors but also become a better writer.

For the short and summarized version of this article, click here.

What’s the Difference Between Skyrim and Skyrim Special Edition

Possible and Plausible (Which One to Use?)