Home EntertainmentShows The Difference Between Zoom and Reverse-Flash
Shows

The Difference Between Zoom and Reverse-Flash 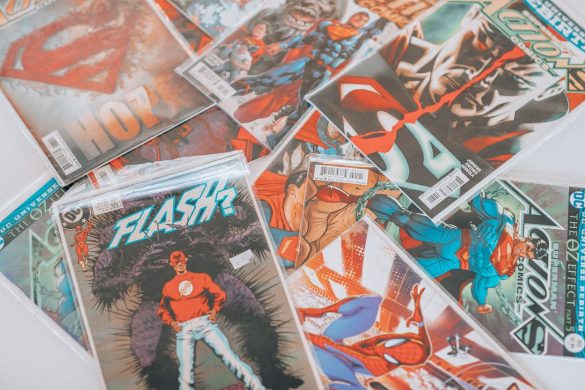 Reverse-Flash and Zoom have a complicated history that leads some to believe they are one and the same villain. Here’s how to tell the difference!

Many of Barry Allen’s comic book enemies have appeared on Flash, but his greatest challenges have been to face two villains–the Reverse-Flash and Zoom. Although both characters are speedsters, they look very different on the show. If you’ve ever looked up the characters in comics, you might be a bit surprised or very confused.

The Reverse-Flash is often referred to in the comics as “Zoom” or “Professor Zoom.” In some comics, Eobard Thawne may be the Reverse-Flash, while in others he is Zoom.

You can visually tell Reverse-Flash and Zoom apart by looking at their costumes. Although the difference is minimal, if you remember to look for it, it’ll be easy to tell which one is which. Zoom’s costume has his eyes covered in dark lenses with his eyes glowing red meanwhile Reverse-Flash’s costume does not cover his eyes.

Another difference between them is the hero they go up against. For the most part, Reverse-Flash went up against Barry Allen. Zoom, on the other hand, went against Wally West.

Let’s dig deeper and find out more about these two Flash villains.

Who is the Reverse-Flash?

Eobard Thawne is known as the Reverse-Flash or “Professor Zoom”. He is the destined enemy of Barry Allen’s Flash.

Eobard Thawne is a 25th century resident who becomes obsessed with Flash and travels back in time to see the Flash. He learns that he’s destined for becoming the Flash’s greatest enemy and to die at his feet. This causes Eobard to lose control of his already unstable mind and causes him to become the villain he has learned about.

Eobard would later kill Barry Allen’s wife and almost kill his new fiancée years later. He was then accidentally snapped by the Flash. This brought Eobard’s original discovery full circle and opened the door to a new interpretation of the character.

Zoom is the villain name of the scientist and criminal profiler Hunter Zolomon. He is the arch nemesis of Wally West’s Flash.

Wally was close to Hunter Zolomon when he discovered that his father, a serial killer, had murdered Hunter’s mother. Unfortunately, Hunter would suffer many more tragedies.

Hunter was determined to find vicious criminals like his father and joined the FBI. He eventually married Ashley, a fellow agent. Ashley’s father was killed in a shootout with a supervillain. After that incident, Ashley split from Hunter and was eventually fired by the FBI. He ended up in Keystone City, where he joined the Police Department and made friends with Wally. Hunter was left with a broken neck after he was attacked by Gorilla Grodd.

Hunter asked his friend, the Flash, to help him travel back in history and stop the tragedies that had happened in his life. Hunter attempted to use the Cosmic Treadmill to accomplish the feat, but Wally declined. This gave Hunter the ability to change his relative time and make it seem like he was moving at incredible speeds. Hunter, now nearly insane, donned a costume based on Flash’s former nemesis Zoom and was christened Zoom.

How can we tell the difference?

Eobard Thawne is very similar to Hunter Zolomon, so how can you tell which one you are looking at?

Have a look at this table to know the difference:

Time is usually a good indicator. If you are looking at a comic book that was published before 2001, then you will be looking at the Reverse-Flash. Zoom is most likely the subject of a comic book that dates from 2001 to The Flash: REBIRTH 2009. Any yellow speedster that you see is likely to be Eobard after Rebirth when Eobard was resurrected. Although Hunter didn’t disappear after Eobard returned, he was not used as often and has yet to appear in The New 52.

You can also use their enemy as an indicator. The Reverse-Flash was primarily a Barry Allen foe, while Zoom was a Wally West villain. There is one visual cue that can be used to distinguish one from the next. Zoom’s costume hides his eyes. These are often characterized by red pupils and dark lenses. Reverse-Flash’s costume makes his eyes visible.

The Reverse-Flash played a major role in FLASHPOINT which was the miniseries that launched The New 52. This Flash storyline uses a yellow costume as the Reverse-Flash.

Who is faster: Flash VS Zoom

If compared by speed alone, Zoom is definitely faster than Flash. This is because Zoom has the ability to slow time around him instead of just super fast, which is what Flash does.

If you’re a Flash fan, then it also goes without saying that Zoom carries much more powerful abilities than Flash himself. Some of which are:

Zoom, despite his name, doesn’t actually have super speed. His ability is to slow down time relative to him which makes everyone around him seem like they’re standing still. The Flash’s ability, on the other hand, uses Speed Force, which allows him to go fast.

However, that does not mean Flash cannot beat Zoom. He has, in fact, several times. But if we are to judge them based solely on who can finish a race first, Zoom would be dubbed the winner.

One example that showcases Reverse-Flash’s absent moral code was when he killed Barry Allen’s mother. He has also killed and discarded several different people with no remorse, which is what sets him apart from the hero, Barry Allen.

Reverse-Flash is seen as the opposite of Barry Allen’s Flash, hence the name ‘Reverse-Flash’. They have similar abilities in which they can go very fast, but Reverse-Flash can travel through time. He often uses his powers to travel through different time points to attempt to kill his nemesis Barry, but since killing Barry would create a paradox in which he wouldn’t exist, the most he can do is make Barry suffer.

The character of Zoom, who came around 2001, is actually derived from the character of Reverse-Flash, who came way before 2001. Although they have a lot of similarities in terms of powers and costumes, you can usually tell them apart visually by looking at their eyes.

To find out more information about this subject Take a quick look at this clip.

Ymail.com vs. Yahoo.com (What’s the difference?)

What is the Difference Between a Heart-Shaped Bum and a Round Shaped Bum? (Facts Explained)

Reek In Game of Thrones TV Show vs....