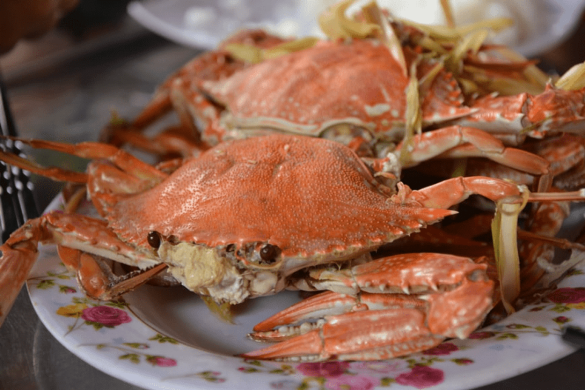 Planning to go on a date and deciding what to order a night before was always my thing. I feel more comfortable knowing what I am going to eat before eating it. After all who wants to throw their money down the drain?

And when ordering something as luxurious as a crab or lobster, nobody likes to throw away the opportunity just like that in the name of experimenting. I may be sounding like a total freak but I am sure many of you will be agreeing with me.

Anyhow, through my own order and by tasting what the other person has ordered on the table, I have had the opportunity to taste all kinds of crabs, which are, Snow or Queen crab, King crab, and Dungeness crab.

Let’s get into more details of each kind of crab one by one before you can choose which one is going to be your meal in the next dine-out. Shall we?

What is a Snow or Queen crab?

Snow crabs are known to have long but thin legs to dig into. The thin legs require more effort by the eater to get into and have lesser meat as compared to the king crab.

Another name for the snow crab is the queen crab (mostly used in Canada). The meat you get from this crab’s claw is sweet in taste and firm in texture. The meat from snow crabs cuts out in long pieces. You can say that the queen crab is another version of a snow crab.

The season of snow or queen crab starts in April and lasts till October or November.

The size of a snow crab is leaner than the King crab or Dungeness crab weighing approximately 4 lbs. If you have ordered a snow crab you can crack it open with your bare hands if you want.

What is a King crab?

King crabs are large crabs often found in cold places. The meat you get from a king crab is somewhat similar to a lobster.

A king crab’s big claws make it easy for a person to open them and get the large pieces of meat from them. The meat in a king crab has sweet goodness in it. The snowy white, big chunk of meat with the red strips surely makes this king crab a king’s meal.

As the name suggests itself, king crabs are huge, often weighing around 19 lbs. This is another factor for this high costing crab at your table. But of course, the taste and quantity of the meat make it worth it!

This is the most loved hence the most selling species that people like. Those who love lobsters can also try this crab with no hesitation because I know people who think, king crab is even better tasting than lobster.

The season of a king crab runs from October to January. This short season is one of the reasons for this crab being the most pricey one. The demand and supply of king crab have not just made its price go up but many countries have regulations to help protect this species as it is close to becoming extinct, Alaska’s regulation is one of them.

What is a Dungeness crab?

A Dungeness crab is somewhat similar to a king crab in terms of larger legs that make the digging in easy. They’re also similar in taste, meat quantity. In texture, you may find similarities in Dungeness crab and Snow crab.

Also, a Dungeness crab weighs up to 3 lbs and the 1/4 weight is meat. Their season begins in November.

For a clear comparison, take a look at this table showing the differences between a Snow crab, a King crab, and a Dungeness crab.

Where can you find these crabs?

The ocean is full of different species but to know where to king them and that too in good quantity and quality is a blessing to know. Look down to know where can you find the listed crabs.

How do they each taste?

Finally, we have headed to the most waited section of this whole article. Some of you probably must have skipped every other section just to know how each of these crabs tastes.

To cut to the chase, let me list down the taste of Snow crab, King crab, and Dungeness crab,

The taste of the snow crab meat is rather sweet but briny. As the species is caught from the salted water, it’s only natural for it to taste salty.

As the meat of the king crab is delicate and fine, with white meat and a sweet taste. It is almost like you are putting-in snow in your mouth.

Well, there is one way of eating crab and that is going to a restaurant. And there is another way of eating a crab. Catch, clean, and cook it yourself. Check this video and see if you can do this or not.

After reading out this article I am sure you will be ordering your crab with more confidence this time. Your fine dine will go fine this time!

To summarize, snow crabs are known to have long and thin legs and have the least amount of meat. King crabs are the largest but also the rarest and most expensive. The Dungeness, despite being the smallest out of the three, carry almost as much meat as a King crab.

However, may it be a snow crab, a king crab, or else the Dungeness crab, all that matters is your tastebuds and the money you are willing to pay for that meal.

Each of these crabs has its own goodness and things to be considered before getting your hands into it. Hoping for your better crab-eating experience from now on!

For a quick and summarized version about these types of crabs, click here.

The Difference Between My Liege and My Lord

What is the Difference Between Cucumber and Zucchini?...

Is There Any Difference Between A Bread And...

What is the Difference Between a Mantis Shrimp...

What Is The Difference Between Prepared Mustard And...