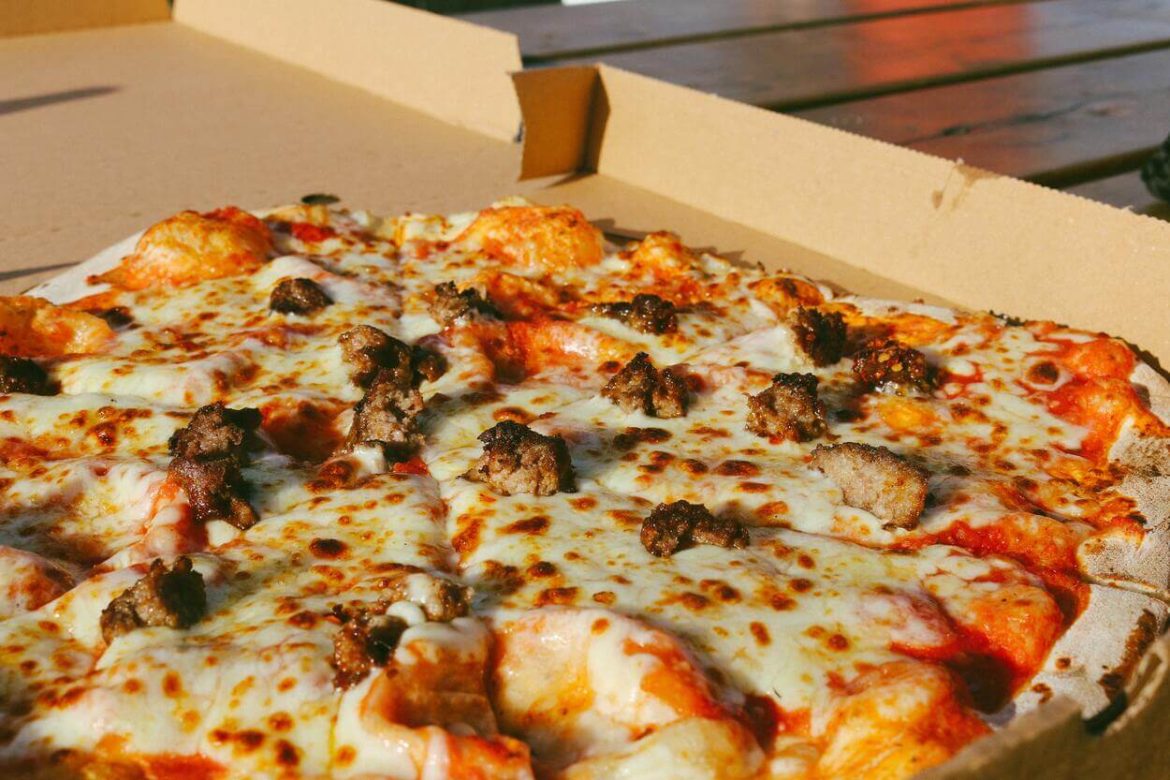 Domino’s Pan Pizza and Hand-tossed are prepared differently. Pan pizza is baked in a deep-dish pan with lots of oil within the pan. In comparison, the Hand-tossed is stretched out by hand and has more oil inside the dough.

Their textures are also different, even if they’re both pizzas. If you’re a foodie who wants to bake pizzas but isn’t sure about the differences between these crusts, I have a detailed account of their differences here.

In this article, I’ll discuss different types of pizza, crusts, and what those pizzas contain.

What Does Hand-toss Mean?

It means the literal! Hand tossing a pizza implies that you’re bursting the air bubbles in the dough. Therefore, the hand-tossed crust has fewer bubbles and doesn’t rise as much.

A hand-tossed pizza is one where the dough is stretched by tossing it in the air. I’m sure you must have seen those Italian chefs’ videos where they’re beautifully spinning pizza dough in the air.

After it’s stretched too thin, you bake the pizza on a slab in a hot oven. This technique results in a thin crust pizza, such as the New York-style, Brooklyn style, and traditional Italian Neapolitan pizza.

This kind of pizza requires skills to make at home. Here’s how you can make a hand-tossed pizza on your own:

What’s the Difference Between Dominos’s Pan Pizza and Hand-Tossed?

The pan pizza has a thicker crust and is crunchy on the outside while fluffy on the inside. On the other hand, the dough isn’t placed on the pan in hand-tossed pizza.

Instead, it’s tossed in the air to find the right shape. It’s baked using a thin aluminum pan.

Pan pizza is baked using a deep dish pan with lots of oil within the pan when it comes to the preparation. The dough is then rolled out and placed in the pan.

It rises in the oiled pan until it’s ready to be baked. It has a thick crust with a crunchy outside and soft inside.

Hand-tossed pizza is stretched out primarily using hands and consists of more oil inside the dough than in the pan. The crust is somewhere between thin and a pan pizza crust. It’s not as crunchy on the outside and mainly has a chewy crust.

Although, hand-tossed and pan pizzas use the same room-temperature pizza dough. It’s made out of all-purpose flour, dry yeast, warm water, salt, and Olive Oil. The critical difference between the two is the technique used to prepare them, which results in different tastes and textures.

Pan pizza has a handmade base that comes directly from the outlet manufacturer. It always comes in the same size and thickness.

However, hand-tossed means that the base is made at the time of the order. It doesn’t need any rolling pin as it’s tossed in the air using a hand. Therefore, the thickness and thinness of this dough vary as per the chef.

Check out these descriptions below:

The pan pizza crust has a fluffy texture. It’s similar to focaccia.

The hand-tossed crust is thin because the air tossing bursts the bubbles in the crust. This makes its rise more minor than the pan pizza crust.

Moreover, the crust of pan pizza is also golden because of the excess oil used in the pan, which helps fry the crust. This crust can also accommodate more toppings as it’s thicker.

It depends on your taste. Hand-tossed pizzas are usually considered a more popular choice by pizza enthusiasts.

The texture of a pan pizza is fluffy similar to that of bread. It’s thick, and the bread-like crust can be about 1 inch deep.

Hand-tossed seems to be the better choice for which one is healthier. This is because the thicker pan pizza crust contains meatier toppings.

In addition, the hand-tossed pizza has a thinner crust, so it can only handle a few toppings. For this reason, it’s the definitive version for people who don’t exercise a lot. If you’re on a diet, you should opt for the hand-tossed variants as they contain fewer toppings and fewer calories.

Moreover, people also don’t prefer pan pizzas because they feel that it’s almost fried. This is why hand-tossed is a more common choice than pan pizza.

Pan pizza is filled with much more calories than the hand-tossed pizza because of its thick crust, But it isn’t that bad. It’s better suited for people who lead a more active lifestyle.

And if you enjoy chewing a lot for a pastime, this could be the pizza for you. Having only one pan pizza would be enough to enjoy for a whole movie!

Take a quick look at this video explaining how to hand-toss a pizza dough:

What Different Types of Crusts Does Dominos Have?

Dominos consists of pizza crusts of all styles. Their choices include the hand-tossed garlic-seasoned crust, handmade pan, crunchy thin, Brooklyn style, and gluten-free.

Here’s a list of different types of pizza crusts:

Moreover, in some regions, the pan pizza only comes in the medium, the gluten comes in small, and Brooklyn comes in large. Only hand-tossed and thin and crispy are available in either dimension.

Which Crust is Best in Dominos?

According to dominoes themselves, their fresh pan pizza is the best. Its crust is deliciously soft, buttery, cheesy, and delightfully crunchy.

They have many more choices. Their cheese burst crust is filled with liquid cheese inside. The classic hand-tossed is crispy on the outside while soft and light on the inside.

The wheat thin crust is a light, healthier, and delicious crust from dominos. This type of pizza has a slim and crispy crust with a wafer-thin base and is extremely crunchy.

Here’s a list of their best types of pizza crust, ranked by taste:

What’s the Difference Between Hand-Tossed and Brooklyn Style Pizza?

The main difference between Dominos Brooklyn style and hand-tossed pizza is in their size and crunchiness. The Brooklyn-style pizza is much thinner and crunchier than hand-tossed, thicker with a chewy crust.

If you’re wondering how the Brooklyn-style pizza is a little thinner, it was stretched by hand. This makes it crunchier than the hand-tossed pizza, but its slices are also wider.

Examples of these are the cheese burst, thin and crispy, and flatbread. They also introduced their Brooklyn-style pizza to create authenticity for New Yorkers. As for the toppings, it has more pepperonis, while hand-tossed has more cheese in its crust.

It’s also unique because the dough is hand-stretched and has way less moisture. This is how it’s baked in New York. This style brings the authenticity and experience New Yorkers usually get.

The Brooklyn-style pizza is also distinctive because of the pepperoni. However, the hand-tossed pizza has lots of cheese than the Brooklyn pizza.

This pizza is perfect for those who prefer less dough. It has a thin crust, and it’s cooked with cornmeal to achieve the desired crispness.

As far as which tastes better is concerned, it depends on you! If you love more cheese, then you should go for the hand-tossed. However, if you love pepperoni more, go for the Brooklyn style.

The Brooklyn-style pizza is crustier, and the sauce tastes natural and authentic. Although, this doesn’t mean that the hand-tossed isn’t realistic, as it’s also seasoned with garlic oil once it’s cooked.

Overall, you’ll know which is which if you can observe the technique used to prepare these pizzas. Hand-tossed is tossed in the air to burst air bubbles and then stretched onto the pan. Whereas pan pizza is made using a deep-dish pan, and the dough is rolled and placed in it.

When it comes to the looks, the pan pizza has a more golden color because it’s fried due to the oil in the pan and within the dough. Comparatively, the hand-tossed pizza is dehydrated and much crunchier because it has little oil.

I hope this article provides you with all the necessary details you need about different pizza crusts!

Click here to view the web story version on the differences between Hand-Tossed and Pan Pizzas.