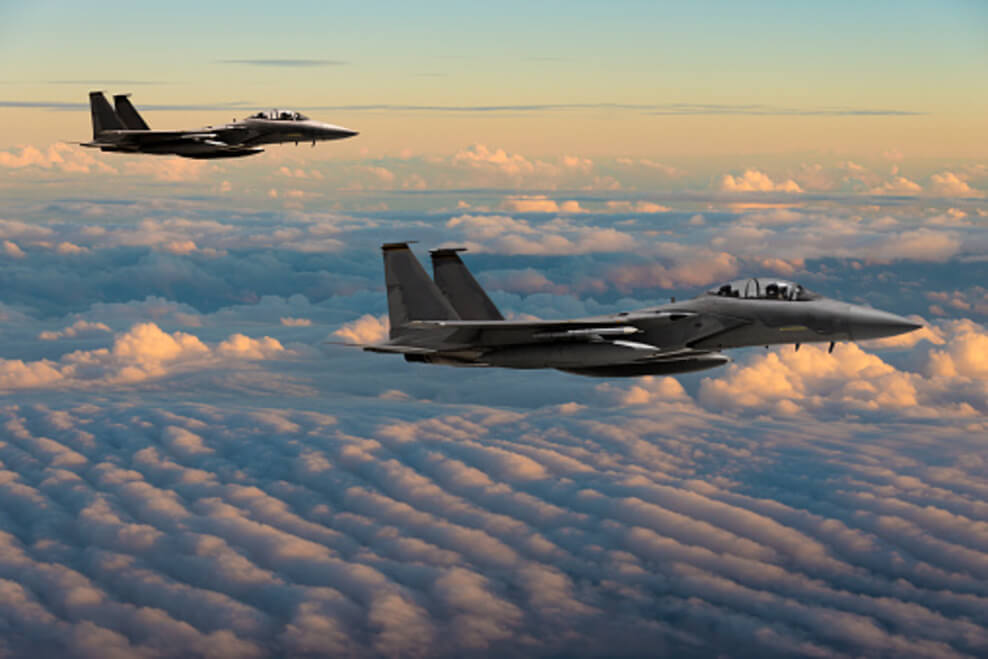 The F-15 and F-16 are both fighter jets that serve in a variety of roles for various militaries. The F-16 is a single-engine fighter aircraft that is less powerful but more maneuverable whereas the F-15 is a twin-engine fighter jet capable of extremely high speeds and altitudes, whereas the F-16 Both F-15s and F-16s frequently serve alongside one another in various conflicts, often playing to their respective strengths.

The F-15 and F-16 are two different fighter jets with unique powers and roles for the U.S. air force. They have several differences that I will discuss in this article. You will get all the information you need to know about these fighter jets. Apart from that, the basics and ambiguities will also be discussed.

Just stay calm till the end.

What is the difference between an F-16 and an F-15 in the United States Air Force?

They both identify as “fighters.” They are available in a variety of versions, sub-versions, and production runs, or “blocks,” including ground attack variants, yet there are some considerable differences between the two.

F–15s have two engines and two tails that are also known as vertical stabilizers, which are larger in overall size and can carry a heavier payload than F-16s. They have the upper hand in terms of brute force. While F-16s are smaller and lighter, they have a single-engine and vertical stabilizer and maybe more maneuverable.

The F-15 is the oldest one if we start with the original vision of planes. It was designed at the time to engage and defeat the MIG 31, which was a relatively unknown Soviet fighter at the time.

In any case, the F-15 was given every capability imaginable, including massive amounts of thrust. It can accelerate straight up, has maneuverability, range, a ceiling, and so on. It’s most likely the best of the fourth generation of fighters.

The F-16 was developed later, as the Air Force realized it needed more aircraft at a lower cost. It was designed to be inherently unstable to maximize performance; without assistance, a person could not maintain level flight in the aircraft. As a result, the F-16 became the first high-performance fly-by-wire combat.

Both aircraft are classified as the fourth generation, which means they are from the same era. They have undergone several evolutions, each with significant upgrades. Except for the F-15 special role aircraft like Wild Weasel, I doubt there is a significant electronic capability difference between them.

All in all, F-15 is finished as a production aircraft, whereas the F-16 may continue to be sold overseas, owing to cost concerns.

It is dependent on the model, the mission, and the financial restrictions. To begin with, the F-15 boasts a more powerful radar and a longer range in air-to-air combat.

The F-16 is smaller, making it more difficult to spot visually and having a tighter instantaneous turn radius, while the F-15 is faster and recovers faster due to a higher thrust to weight ratio.

Due to BVR, speed, and recovery time, I would say that F-15 is better.

The F-15 E is a multi-role Eagle with two seats. I believe the F-15 E can carry more weapons further, but the F-16 is a little more versatile.

So, because of the damage targeting pod, I’d choose the F-16 for broad air-to-ground combat. The F-15 E, on the other hand, is excellent for deep strikes.

If you’re looking to equip an air force, the F-16 is a superior option because it costs about half as much to acquire and maintain as the F-15.

Overall, I believe the F-16 is the superior aircraft. This is why, unlike the F-15, it is the most successful Western fighter today.

What do you know about the origin and history of these jets?

Both planes have been in service since the 1970s, but the F-16 is newer and has “fly by wire,” which means the pilot’s control inputs instruct the computer(s), and the computer(s) move the control surfaces. The original version of the F-15 used traditional pilot input via cables and rods, hydraulics, and pulleys, while there is no authentic information about the newer versions.

The best Russian fighter was the MiG-21, which had limited radar and was designed to fight with short-range heat-seeking missiles. The F-4 Phantom II, designed as a fleet defense fighter with a secondary air-to-ground role, was the best American fighter in Vietnam.

The F-14 and F-15 were intended to replace the F-4 in the roles of fleet defense and air superiority.  The F-14 was designed to be a fast, dog fighter based on the weapons systems developed for the F-111.
The F-15, on the other hand, had the same air-to-air weapon load as the F-4E, consisting of four AIM-7 Sparrows, four AIM-9 sidewinders, and a 20 MM Vulcan.

Check out the video below to know which one is better!

The F-4 had one of the most advanced radars in its day, but it was large and expensive to produce. The F 111, an Air Force bomber designed to be used as a fleet defense fighter by the Navy, was the first F-4 replacement. The F-111B would have advanced radar and a 100-mile-range missile to shoot down cruise missiles and bombers. The navy’s F-111 was grounded.

The two planes are designed for entirely different purposes. The F-15 is a fighter with superior air superiority, whereas the F-16 is a lightweight, versatile, multi-role fighter. This means they were designed differently and fly differently. The F-15 was designed with air-to-ground strikes in mind, and it can carry a variety of guided and unguided weapons on its underwing and centerline pylons.

F-16 is also known as the fighting falcon.

The table below illustrates some of the key differences between the F-15 and F-16.

What are some basics about F-15?

The F-15 has a specialized fuel compartment that allows two separate fuel packs, known as “fast packs,” to be attached. These packs enable the F-15 to carry more fuel on board to be used if the central fuel supply runs out. It can also stay in the air for longer periods without refueling.

The F-15 has some interesting facts, such as;

The F-15, also known as the Eagle, can accelerate like a rocket in pure vertical flight, climbing over 98,000 feet in less than three minutes and sustaining extremely high G turns. The Eagle’s aerodynamics allow it to reach speeds of up to Mach 2.5 while remaining stable at high angles of attack.

One disadvantage of the F-15 is that it can fly faster than its design G loading, which is why a warning system was installed to remind pilots to slow down.

We have a basic understanding of the F-15, its features, and its distinguishing characteristics. Don’t we?

The F-16 was designed as a light-weight fighter with a high power-to-weight ratio for excellent performance, a fly-by-wire control system, and a semi-reclining pilot’s seat for a wide field of vision. It is also known as the Fighting Falcon, is capable of air combat but has also evolved into an exceptional multi-purpose fighter.

Here are some of the facts about F-16,

Because of its excellent turning abilities and capabilities, the F-16 has become an outstanding and widely used multi-purpose fighter plane.

As we can see, the F-16 has some interesting features that we should be aware of at all times.

The last F-15 A, an Oregon Air National Guard aircraft, was retired on September 16, 2009, bringing the F-15 A and F-15 B types out of service in the United States. The F-15 A and B versions have been retired, while the F-15 C and D models have been replaced in US service by the newer F-22 Raptor.

When you engage a different aircraft, you strive to maximize your advantages while exploiting the disadvantages of the opposing jet. In the scenario of a clean F-16 (largemouth/big motor) vs. a clean PW-220 F-15 C, the F 15 will be at a disadvantage if it tries to fight a continuous turning fight.

If the conflict takes place at a leisurely pace, the F-16 will be at a disadvantage. Difference experiences and training give different answers. F-15 C pilots are solely responsible for air-to-air combat, whereas F-16 pilots are responsible for a wide range of tasks.

This usually gives the F-15 C the upper hand!  A well-flown F-16 (largemouth, large motor) is a formidable opponent.

It completely depends on who makes fewer errors.

In conclusion, the F-15 and F-16 are two fighter jets. They have the same purpose but differ in terms of characteristics and features. They vary in terms of cost, operations, specifications, and other basic features.

The F-15 is distinguished by its twin-engine layout, which provides enough thrust for the aircraft to accelerate while ascending straight up at a 90-degree angle, rising 30,000 feet in 60 seconds. The sweeping wing and twin-tail design provide a high angle of attack and good stability at high speeds.

The F-16 is a single-engine aircraft with a single tail that uses the same Pratt & Whitney P100 jet engine as the F-15. It was the first airplane in the world to feature relaxed, or negative, stability. Most planes are built with positive stability in mind, which means they will spontaneously return to a straight and level flying path without any input from the pilot. As a result of the relaxed stability, movement is more efficient in terms of energy loss.

I have already discussed them in detail. Though people generally ask which one is better, I think it depends on what purpose the jet is needed for and whether a pilot can decide this according to the flight he has to take.

We can’t even judge it without getting clear knowledge about these planes.

The web story version of this article can be previewed here.

A Dragon and a Drake- (A detailed comparison)