Home TechnologyProducts Falchion vs. Scimitar (Is There a Difference?)
Products

Falchion vs. Scimitar (Is There a Difference?) 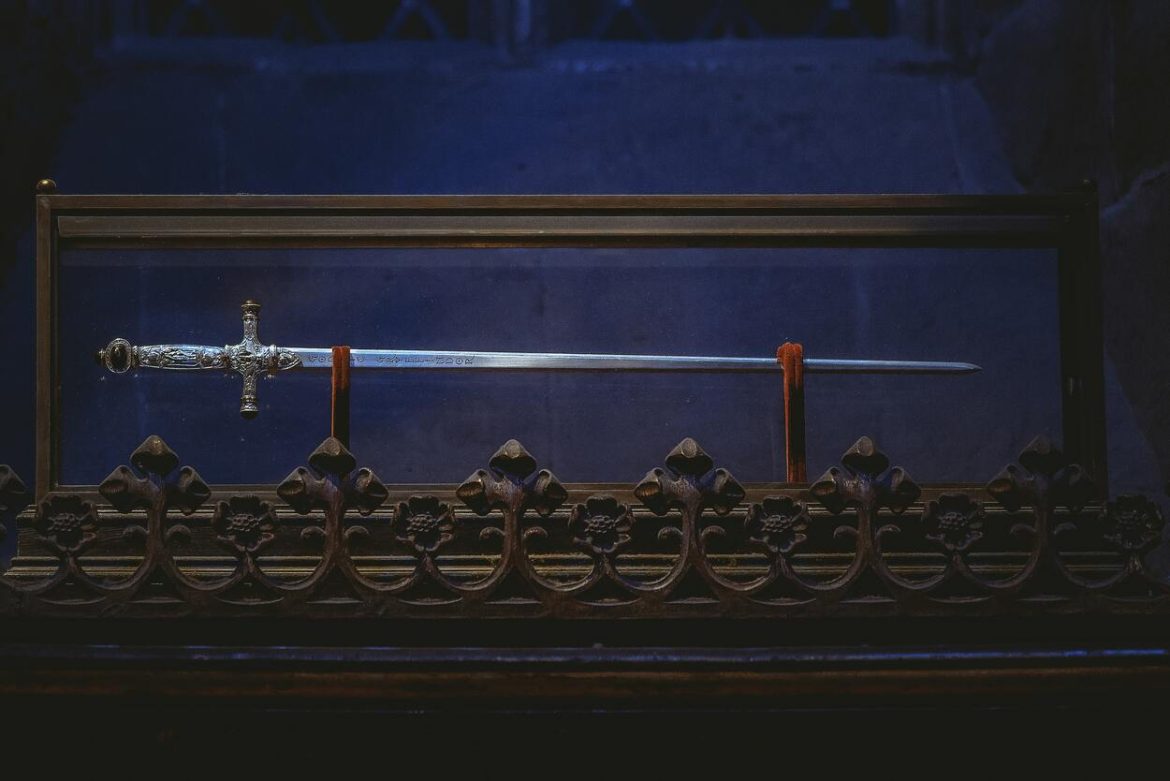 Falchion and scimitar are both different weapons. They’re swords, but the falchion is a one-handed, single-sided cutting one. Whereas a scimitar usually has more curves and usually widens at the end.

Although both are used as weaponry, they come from very different periods. The falchion is from the medieval era. In contrast, the scimitar is from the Middle Eastern.

I’ll also briefly discuss the history and background associated with these weapons. If you’re interested in weaponry, or maybe you’re a sword collector, then you’ve come to the right place!

What is Falchion Weapon?

Falchion is usually a straight sword with a curved edge used in Europe from about the 1200s. It’s one of the few words which survived after the late fifteenth century.

You’ll see one right away for its long narrow blade with a decoration on the hilt. This design is of middle eastern influence, an essential feature in Venetian and Spanish art.

Its features include its broadness and curved design with the edge on its convex side. It was one of the most popular weapons used in the medieval period.

Func fact: “Falchion” is derived from the old French word, “fauchon.” This french term could translate to a “broad sword.”

This weapon was based on a sharp farming tool used by farm laborers, farmers, and peasants during the medieval era. Blacksmiths mass-produced it at the time because of its demand. In addition, one of their primary use was for cutting an opponent’s limbs or head.

A falchion was a weapon with the combined weight and power of an ax and a sword. Moreover, this sword resembles more of a knife in other versions, but some versions tend to have an irregular, pointed shape.

Falchion is about 37 to 40 inches long and weighs approximately one to two pounds. Originally it was made from iron and steel.

Its most common designs were single-edged, broad, and slightly curved on the blade’s tip.

Did Vikings use Falchions?

Yes, even knights also used them. Falchion swords were common among Crusaders in the Middle Ages.

These single-edged swords were mainly found in Scandinavia, where most Vikings used them. While its origins are still unidentified and up for debate, historians do agree on a few things about this sword. The most common construction of the falchion is a wooden grip with an iron or steel blade.

There was a common belief that this sword wasn’t of good quality and was seen as unworthy of use by the knights. But according to some manuscripts, the falchion is the third primary sword for armed men and secondary for knights.

It has been noted in some historical manuscripts that this sword has several influences. Even though it was initially derived from the sharp farming tools, the Italian Renaissance may also have influenced it.

Bladesmiths mass-produced these types of weapons during medieval times too. Moreover, people assumed that this sword was derived from the Frankish scramasax. It’s a long single-edged knife used for fighting.

There are two types of the medieval falchion sword:

Is a Scimitar a Falchion?

No. This one is a curved blade, and it usually comes with a long-handle billhook.

In fact, scimitars are more similar to sabers because they’re also single-edged. However, compared to a falchion, they’re more specialized for their functions. According to this article, a scimitar’s primary use is for execution or beheading.

According to some people, the origins of the scimitar can be traced back to Egyptian swords, such as the Khopesh. However, history suggests that these are a lot more contemporary.

Most modern functional replicas of the scimitars are based on the Persian sword, “shamshir.” These are much cheaper and fall within the price range. There are only two accurate models: the cold steel and the windlass steel craft versions.

Is there a Difference Between a Falchion and a Scimitar?

In addition to their physical difference, the falchion was a unique sword used for the same purposes as an ax. It was considered a poor man’s field weapon.

In fact, it was shared amongst peasant soldiers from the 11th to 16th century. The falchion is widely considered to be the ancestor of the modern machete. It also somewhat resembles it!

However, it wasn’t exclusively a commoner’s weapon. There were a few which were gold plated and were very ornate. These were used and treasured by the nobility. Falchions and messers were their default weapons and were shared on the medieval battlefield for centuries.

While a scimitar is most often used as an actual weapon for war. Muslims and Arabs are famous for using them. Check out this table for more information:

What is the Advantage of the Scimitar Compared to the Sword?

As mentioned, a scimitar is basically the same as a sabre. It’s a word used in the British Empire to describe Sabres of middle eastern or Asian origin. In French usage, a sabre is any sword that looks like a sabre and usually reflects the blade’s grip.

A scimitar is a British term for a sabre used by the Turkic soldiers in Central Asia.

The advantage is that for the same length of the blade, a sword has a greater reach. The curve of the scimitar compromises the ability to reach the total distance of its edge. Swords are also considered better at giving points.

Scimitars are considered to be better at hewing and slicing. The slight curve of the blade provides a better edge alignment.

On the other hand, heavily curved scimitars perform well in drawing cuts or slices. Because of its curve, it’s easier to slice without the need to change the arm posture. Many historical sabres, such as the “tulwar,” were made to be used in reasonably close combat.

You can find one of the most significant contrasts in usage between scimitars and swords in the cavalry. Heavy cavalry usually favored swords. It would use them as pseudo lance if the honest Lance were broken or lost.

Light cavalry tended to prefer scimitars. They were more useful in a melee to strike at the enemy. In short, a sword tends to be better at giving points, and a scimitar is better at cutting.

What Makes a Sword a Falchion?

If a sword is one-handed and single-edged, you can consider it a falchion. Its design is reminiscent of the Persian scimitar and the Chinese dadao. It combines the weight and power of an ax and the versatility of a sword.

The features that make a sword a falchion are that these swords almost always include a single edge with a slight curve on the blade towards the tip. Most were also affixed with a quilled cross guard for the hilt.

They’re considered convenient pieces of equipment. They were used as tools between wars and fights. And some later versions are very ornate and were used by the nobility.

Trivia: Falchion is associated with nobles. They use such as a special weapon used to penetrate through armors made out of leather and chain mail.

Is the Falchion Better than the Scimitar?

It depends on where you’ll use it.

Soldiers used scimitars for horse warfare. That’s because they were relatively lightweight as compared to more giant swords. Their curved design was good for slashing opponents while riding their horses.

On the other hand, warriors primarily used falchion swords for cutting and opening the opponent’s limbs. Many also used them for slicing the heads and unprotected areas of the body using a single stroke. This indicates how sharp and powerful they were.

The earliest use of a scimitar dates back to the 9th century. Turkic and Tungusic soldiers commonly used this as a weapon in Central Asia. It’s also used in Saudia Arabia as an executioner’s tool for beheading. Scimitar falls under the category of greatswords.

Although, falchions were mainly used as tools for cutting and slicing. They’re even based on farming tools from the medieval era. You can still use them as farming tools if you like.

However, a scimitar was used during an attack by soldiers riding horses. It’s also much lighter, so you need proper practice to wield it properly.

Take a quick look at this video explaining different blade shapes and their effectiveness:

In conclusion, the main difference between a falchion and a scimitar is their structure and function.

They’re both different weapons with some slight changes in appearance. A single-handed falchion can be slightly curved, with a designed edge. This one is good for farming!

Whereas a scimitar is a single-edged sword with a convexly curved blade. It has a thickened, unsharpened back edge. It is generally lighter and smaller. Therefore, it was preferred more in horse warfare.

Not to forget the difference in their origins. A falchion originating in Europe was used in the medieval era. Whereas a scimitar is from the Middle Eastern times, its origins are Persian.

I hope this article provided you with all the details you needed about a falchion and a scimitar!

Click here to view the web story that differentiates these two weapons concisely.