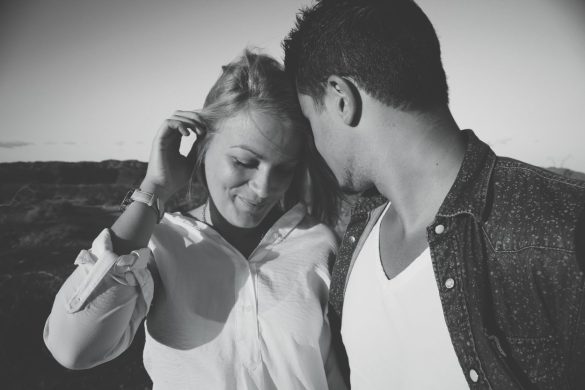 If we talk about, how one feels when being touched in a friendly or flirty way, it can get indescribable, but let’s get into it.

What is considered flirty touching?

Body language while flirting can involve flicking the hair, eye contact, briefly touching, and other similar gestures. Flirting is mostly done in an under-exaggerated or shy style, whereas vocal flirting can include:

Flirting is sexual behavior that can involve spoken or written communication, and body language. It can either indicate a deep relationship or it’s solely for amusement. Flirtatious behavior involves speaking or behaving in a certain way that suggests a slightly greater intimacy level than the relationship between the two people would justify.

Social etiquettes disapprove of the direct expression of sexual interest or behavior, however healthy flirting solely includes communicating in a sense of playfulness or irony.

Flirtatious behavior varies with different cultures because of the different modes of social etiquette, for instance, it can involve how closely people should stand/sit, how long people hold eye contact, and to what degree touching is appropriate. However, there’re some behaviors that are considered universal, for example, ethologist Irenäus Eibl-Eibesfeldt found that, in places as different as Africa and North America, women show similar flirtatious behavior, such as a prolonged eye contact which is followed by a nonchalant break of stare with a slight smile.

However, flirting can be dangerous for you, if you aren’t cautious about who you should be flirting with, because, flirting with sexual intention with someone who is involved in an official relationship can be a highly consequential act. This action leads to jealousy and can trigger anger which can lead to a physical fight. Thus, you should be careful with whom you are making eye contact.

How can you tell the difference between flirting and being friendly?

Flirtatious behavior can include a change in tone or volume, giving compliments, teasing the other person, eye contact or a brief touch on the face or neck can tell you if someone is being flirty. In the case of being friendly, teasing or hitting for the sole purpose of irritating the other person can suggest only friendliness.

Being flirty and being friendly has many differences, first, it depends upon the intention of the person who’s being flirty or friendly. However, it’s difficult to know a person’s intention and the only way is to know by the gestures and the behavior.

If two people feel differently about each other then, being friendly can mean being flirty and vice versa. It solely depends on what kind of relationship two people have.

How do you know if a friend likes you in a romantic way?

People flirt for several reasons, however, a social anthropologist Kate Fox said, “there are two main types of flirting: flirting just for fun and flirting with further intent.”

Henningsen and colleagues’ study demonstrated that flirting with sexual intention, was found that it’s more prominent among men, whereas flirting for the purpose of relationship development, was found more employed by women.

Despite what the above study says, men can also flirt for the purpose of relationship development, and women can flirt with a sexual intention, basically, it depends on the person.

When someone is being flirty, it can mean two things, the first is that the person is being playful for amusement and the second is that, the person is looking for a greater level of intimacy or relationship.

Watch the video to know the 7 signs that can tell you if your friend has a crush on you or not.

Flirting is a way of sending out signals of sexual interest to someone, flirting can involve non-verbal gestures, for instance, exchange of glances, hand-touching, and flicking of hair, while verbal signs can include chatting, giving flattering comments, and sometimes end up exchanging of contact numbers.

Flirting is a puzzling phenomenon, as it’s done very subtly, because of this subtleness sometimes flirting behaviors are difficult to interpret. However, if the major purpose of flirting is to convey the message that the person is interested in someone, then why isn’t this done explicitly?

A possible explanation can be, according to Gersick and colleagues, that signaling interest can cost one a friendship, or anything that is of value, as it can make a disturbance in the nature of a relationship. For example, flirting in order to signal sexual interest to a close friend can bear a risk of introducing uncertainty in their friendship, especially when the flirting is rejected by the person.

Thus, for this reason, people prefer flirting as it’s subtle and decreases the risks of disturbing a relationship.

Here are some differences between playful and flirtatious touching.

Flirting is always the first step toward making an effort for a relationship. Sometimes, flirting can cost you a friendship because flirting with a friend who isn’t interested in you the way you might be and has different feelings for you can cause disturbance in your friendship, thus only take this step when you see signs of interest from the other person.

Flirting is quite difficult to interpret, as everyone has their own ways of perceiving it. Even a normal smile and eye contact towards someone who isn’t interested in you can cost you your respect.

Playful touching depends on how much it is being done, because to some degree it’s considered playful touching with only the intention of amusement, however, if it happens repeatedly, it can be considered flirting.