Home LifestyleCulture Getting High to Blow a Joint vs. Getting Drunk to Drink Alcohol (Shocking Differences)
Culture

Getting High to Blow a Joint vs. Getting Drunk to Drink Alcohol (Shocking Differences) 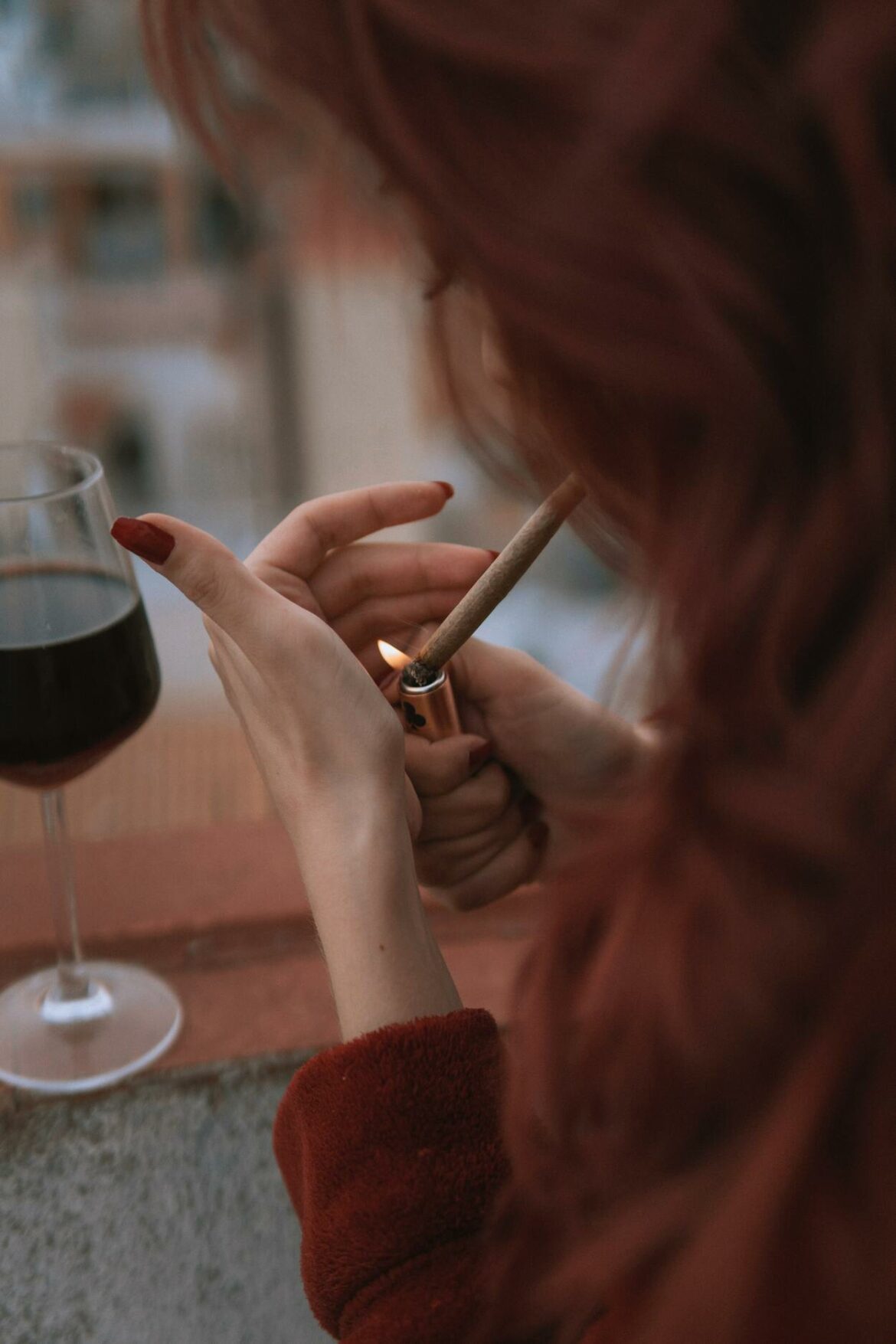 Drugs and alcohol, are two things that are almost a necessity for many humans. Even though these two things have equal amounts of social implications and are greatly stigmatized by society.

We all surely remember our parents warning us about the ill consequences of consuming these recreational drugs and how they would lead our lives into a downwards spiral.

Growing up, we all have become fairly acquainted with such drugs, especially alcohol and joints (marihuana). These are more socially accepted than harder drugs such as cocaine, LSD, or meth, which have actual social, mental, and physical consequences.

That being said, we have also experienced firsthand or through our friends how alcohol or marijuana affects us, and yet they seem similar in many manners. So the question arises, do these two drugs have the same effects, and are they truly different?

The answer is YES, Alcohol and marijuana can be slightly similar in some aspects, however, for the most part, are complete polar opposites of one another.

Join me as I thoroughly break down the effects of the devil’s lettuce and angry juice.

Alcohol which the chemical term is ethanol or ethyl alcohol is the ingredient found in beers, wines, and spirits that causes one to experience “drunkness”.

Alcohol is formed when yeast ferments (breaks down in the absence of oxygen) the sugars in different food. Wine, for example, is made from grape sugar, beer from malted barley sugar, cider from apple sugar, and vodka from potato sugar.

Alcohol is classified as a ‘sedative hypnotic’ drug. It acts to depress (slow down) the central nervous system at high doses. At lower doses, alcohol acts as a stimulant which causes feelings of euphoria and happiness.

However, drinking too much alcohol at one session can lead to drowsiness, respiratory depression (where breathing becomes slow, shallow, or stops entirely), coma, and in rare cases death.

Alcohol is commonly classified as a depressant, i.e it slows down nerve impulses. Leading to slurred speech, drowsiness, and fatigue.

When ingested Alcohol can hit you pretty fast. It affects your brain within 5 minutes, and you begin feeling the effects within 10 minutes.

Enough with the boring definitions, let’s move on to the juicy part.

Does Alcohol Make You Drunk or High?

When your blood alcohol concentration increases, you’ll start to feel good. You might feel happy, more social and confident, and less restricted. This is because alcohol stimulates the release of the pleasure hormones aka dopamine and serotonin.

Alcohol has stimulating effects when you first start drinking. It is mainly a depressant. The moment it goes into your mouth it begins to do its thing.

As the alcohol makes its way through your body its effects become more noticeable. As you get drunker, you’ll start to experience more adverse physical symptoms.

Symptoms appear because alcohol depresses your central nervous system. It interrupts your brain’s communication pathways, which affects how your brain processes information.

Here is a table showing how varying percentages of alcohol affect a person (note this may not apply to every individual).

What are the Short and Long-term Effects of Alcohol?

Alcohol at first doesn’t seem as bad, it definitely doesn’t fit into the negative connotation associated with alcohol abuse. While its short-term effects are mild at best.

Binge drinking and consuming large amounts of alcohol can put you at risk for accidents. It can cause dehydration and hangovers. Also could interfere with how your brain works.

Short Term effect of alcohol is mild. Depending on the amount of alcohol taken by an individual, it can cause vomiting, diarrhea, headaches, distorted vision and hearing, blackouts, anemia, impaired judgment and etc.

Over time, drinking heavy amounts of alcohol can put you at risk for certain mental and physical health conditions.

Alcohol’s side effects compound quickly and after many years of alcohol abuse, one can expect the following symptoms.

According to NIH (National Institute of Health), Marijuana refers to the dried leaves, flowers, stems, and seeds from the Cannabis sativa or Cannabis indica plant. These plants contain the mind-altering chemical THC and other similar compounds. Extracts are also made from the cannabis plant.

Marijuana is one of the most commonly used drugs right after tobacco and alcohol. Its use is especially prominent among young people.

According to the Monitoring the Future survey, rates of past-year marijuana use among middle and high school students have remained steady, but the number of teens in the 8th and 10th grades has increased.

People smoke marijuana in hand-rolled cigarettes (joints) or in pipes (bongs). It’s also smoked in the form of blunts which are essentially emptied cigars that have been partly or completely refilled with marijuana.

What Does Marijuana Do?

Due to the neurochemical, THC (Tetrahydrocannabinol) is present in marijuana. It makes you feel high. It’s why most people try marijuana.

THC stimulates the pleasure center of your brain, similar to food and sex. This causes a chemical called dopamine to be released, giving you a euphoric, relaxed feeling.

Here are the potential long-term effects including the following:

The main differences between cannabis and alcohol are the way these substances affect the normal functioning of the brain. One of these is the Cerebellum, it’s a part of the brain that is dramatically affected by alcohol.

The cerebellum controls your balance and movement. This is why people often become clumsy and wonky when they’ve had too much to drink. Alcohol also targets the cerebral cortex, which is responsible for making decisions and being rational.

This in turn can influence drinkers to make rash and illogical decisions. Does by making you feel more confident and might make you more likely to say “screw it” and engage in behaviors or activities or say things that you normally would be less inclined to do.

There is a reason why people call it “social lubricant” and “liquid courage”. In higher dosages, it starts to inhibit coordination and motor skills.

If you consume enough, you’ll upset your stomach and vomit. Being emotional can also be the effect of alcohol. They may end up becoming sad or angry or really happy, emotional extremes if you’ll.

Additionally, depending on where you live and your cultural background, smoking weed might be more socially acceptable than alcohol.

However, in some cultures, it’s acceptable to enjoy a joint and a movie alone, while solo drinking may be met with harsher judgment.

How Does Cannabis Work?

Cannabis works in a whole different way, it targets neuro-receptors that are naturally present in your brain, central nervous system, and the rest of your body.

This is why many individuals prefer the experience of being stoned over being drunk. While the high of cannabis can also lower one’s inhibitions. Alcohol is much more likely to result in inappropriate or out-of-character behavior behest of the consumer.

Here’s an analogy that might help you understand more clearly.

Being drunk could be compared to being given control of a toy car. You get to have fun racing it around and crashing it into other things. It’s only when you sober up that you realize that everything that happened was real and had consequences.

Whereas, being high is like normal life. Only more fun and with sudden spontaneous interruptions, to go on adventures in pleasure. You feel smarter and wiser.

You would feel like you can solve the universe’s problems. You would do things you couldn’t do before because it was impossible to feel this way without the high.

Here’s a video that might help you understand better.

Here are the key points of this article:

I hope this article helps you differentiate between getting high and getting drunk.

WHAT IS THE DIFFERENCE BETWEEN A THRIFT STORE AND A GOODWILL STORE? (EXPLAINED)

A BLUNT AND A JOINT- ARE THEY THE SAME?

What’s the Difference Between Entiendo and Comprendo? (Thorough Breakdown)