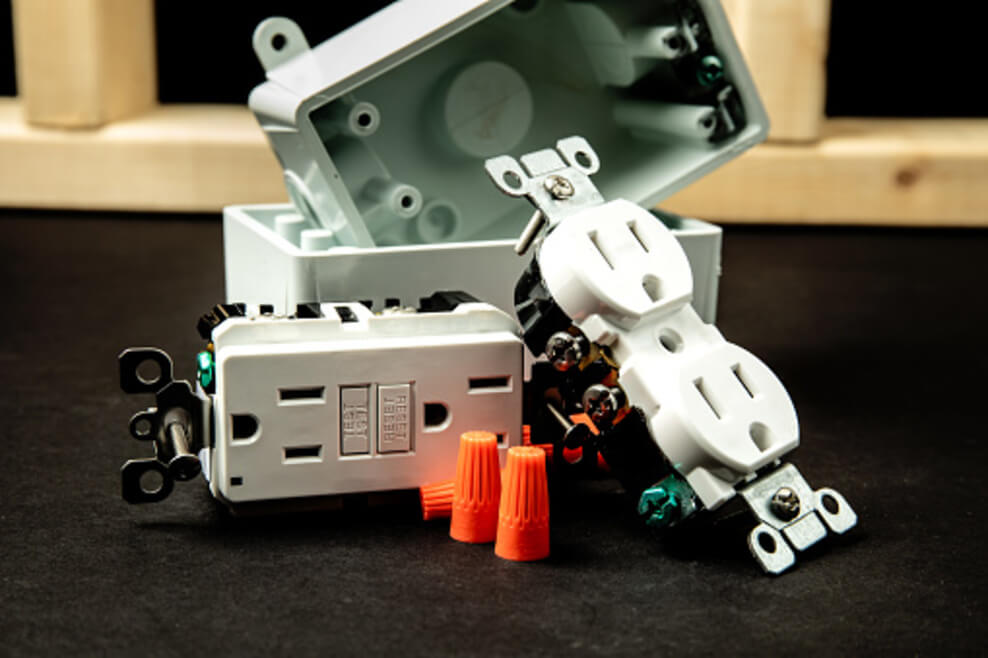 GFCI and GFI are two types of electrical devices that are rendered the same and interchangeable. Yet they have slight variations in their names and the commonality of usage.

The distinction between a GFCI receptacle and a GFI outlet is one of the most common electrical misunderstandings. There isn’t much of a difference. When talking about receptacles, it’s usual to refer to a ground fault circuit interrupter (GFCI) as just a ground fault interrupter.

In this blog, I’ll be talking about these two devices: their uses, the variations they have, and their unique characteristics. I’ll also address several other ambiguities related to these devices that a layman might wonder about.

So, let’s get started already.

What Is A GFCI (Ground Fault Circuit Interrupter) Outlet Or Breaker?

It’s usually required for increased safety on any circuit that might come into contact with water, such as outside, in the kitchen, or in the bathroom.

When the amperage readings of the wires deviate by more than 5 milliamps (5 thousandths of an amp), the GFCI operates like a circuit breaker and turns off the electricity.

GFCI And GFI- What’s The Difference?

An adult male may take up to 16 m Amps before losing control of the charge. The basic difference between a GFCI and a GFI is that of a circuit.

A standard GFI outlet is the first in a series of outlets, and it’s the one that protects the circuit with a GFCI (i.e., everything connected after that point). The power supply will be linked to the breaker’s input side, while the plugs and wires for the remainder of the circuits (other standard wall outlets) will be connected to the breaker’s output side.

Any ground fault on any of these outlets, including the GFI outlet, will trip the circuit breaker and turn off electricity to all of the outlets.

So, when you go into your kitchen or bathroom, you may notice one or two GFI outlets, while the others appear normal (albeit they may have a GFCI sticker), but that one outlet protects them all.

A single GFCI outlet is often used to protect all outdoor outlets (as well as garage outlets).

Is It Necessary For A GFCI To Be The First Outlet?

So, if you want ground fault protection on all of your outlets, start with the GFCI. Using a GFCI breaker is better which is a breaker with a built-in GFCI.

What Is The Difference Between A Grounded Outlet And A Ground Fault Circuit Interrupter (GFCI) Outlet?

A grounded receptacle is more like a crude set of wiring terminals and contact points where the yoke, or backstraps.

It is bonded to the receptacle’s ground pin so that when the receptacle is wired to the green equipment grounding screws on the yoke, it makes contact with the grounded chassis of a metallic gem box, as well as a grounding jumper affixed to it.

A GFCI, on the other hand, is a fairly sophisticated piece of technology. It comprises wiring terminals, contact points, and a grounded yoke assembly with one major difference.

There is a PC board embedded within the unit that senses the differential of current flowing from neutral to ground like a scale, and once the current becomes “unbalanced” or a “ground fault” develops, a relay is shifted and it trips the circuit board much like a mini circuit breaker.

On 2-wire circuits, the neutral carries current, which is the unbalanced or return current once the electrons have passed through the appliance, light bulb, or whatever, and the return current comes back to the source on the neutral.

So the GFCI “weighs” the difference in potential until it “sees” voltage leakage from ground to neutral and trips the relay, killing power at the contact points.

What Does GFCI Stand For?

The ground-fault circuit interrupter, or GFCI, is a fast-acting circuit breaker, which may shut off electric power in as little as 1/40 of a second in the case of any ground fault. It compares the amount of current traveling to and coming back from equipment along circuit conductors.

To summarize, the ground fault circuit interrupter (GFCI) is a device that prevents electrical shocks. They detect stray currents outside the circuit on a different path.

What’s The Difference Between A GFCI And A Standard Outlet?

Most individuals can tell the difference between ordinary outlets and GFCI outlets by their appearance and position.

In today’s homes, three-pronged outlets are placed throughout the living areas. They have two vertical slots with a ground pin underneath and in the center of them.

Most people regard 15-amp outlets as “normal” outlets.

To support particular equipment, some homes include 20-amp outlets, which resemble 15-amp outlets but have a horizontal slot connecting to one of the vertical slots, making a sideways T shape.

The ground fault circuit interrupter (GFCI) is a device that prevents electrical shocks. They detect stray currents outside the circuit on a different path.

A ground fault occurs when the current is mistakenly diverted away from its original electrical route.

Talking about GFCI outlets, they are also known as GFI outlets, which stands for ground fault interrupter; the two devices are virtually the same.

GFCI outlets shut off the electricity on that circuit in a fraction of a second when a current is detected going in the wrong direction.

Even if the current imbalance is extremely minor, these devices will identify the fault and work to prevent the current from passing through water or a person, which would be dangerous.

Is it really necessary to have GFCI outlets on all outlets?

For 125-volt to 250-volt receptacles provided by single-phase branch circuits rated at 150 volts or less to the ground, GFCI protection is necessary.

Bathrooms, garages, crawl spaces, basements, laundry rooms, and other facilities with a water source must have GFCI receptacles.

So, what we look forward to is that grounded outlets are necessary for the protection in different areas where GFCI are used.

This table provides a detailed comparison between GFCI and GFI.

Is It Better To Use AFCI Or GFCI?

GFCI does a better job of performing what it’s supposed to do than AFCI does. This is because GFCI is a more mature technology with a simpler task.

The GFCI simply measures the current in the hot and neutral wires and trips if the difference is too great, allowing you to avoid conducting the difference before you die. Waveforms indicative of sparking are detected by AFCI.

Hopefully, this will prevent a fire. It’ll, however, trip if the waveform is present for some other reason. This may result in inconvenient trips.

I’m also willing to wager that someone has devised a ruse device that generates such a waveform without sparking as a hoax to catch people off guard.

What To Use A GFCI For?

GFCI protection is required anywhere an outlet is near a water faucet. Kitchens, baths, patios, hot tubs, and anything else outside are all good choices.

An electrical outlet with an extra layer of protection known as a Ground Fault Circuit Interrupter is installed where water can be present, such as in the kitchen, baths, outdoors, and garage. It also guards against fires, overheating, and electrical wire damage.

Hence, it should be used in places where water is present.

Is there a safe way to test a GFCI or GFI circuit by getting the wires wet rather than using the test button?

This is a bad concept. The test button is a rock-solid performer. It must be replaced if it trips and cannot be reset.

A GFCI is a device that monitors current flow. Everything that goes in has to come out. The GFCI trips and current flow ceases if this differs by 4–6 milliamperes.

It doesn’t matter if the wires become wet or not; in fact, water isn’t required. You can purchase a GFCI testing gadget that plugs into a wall outlet.

It “simulates” a ground fault, tripping the GFCI if the receptacle is correctly wired and operational. For testing purposes, I don’t advocate getting the wires wet.

When it detects a difference (as tiny as 4 milliamps) between the electric current exiting the system and the current entering, a GFCI/GFI circuit breaker immediately shuts off the flow of power (by relay) at a speed of 25–40 milliseconds.

Hence, several variations make them unique in terms of their usage and advantages. I’ve addressed other outlets and breakers too.

To find out the difference between ROM and ISOS, take a look at this article: What Is The Actual Difference Between ROMs And ISOs?

Being Smart VS Being Intelligent (Not The Same Thing)

What Is The Difference Between Biology And Chemistry?

Click here if you want to view the summary of this article.