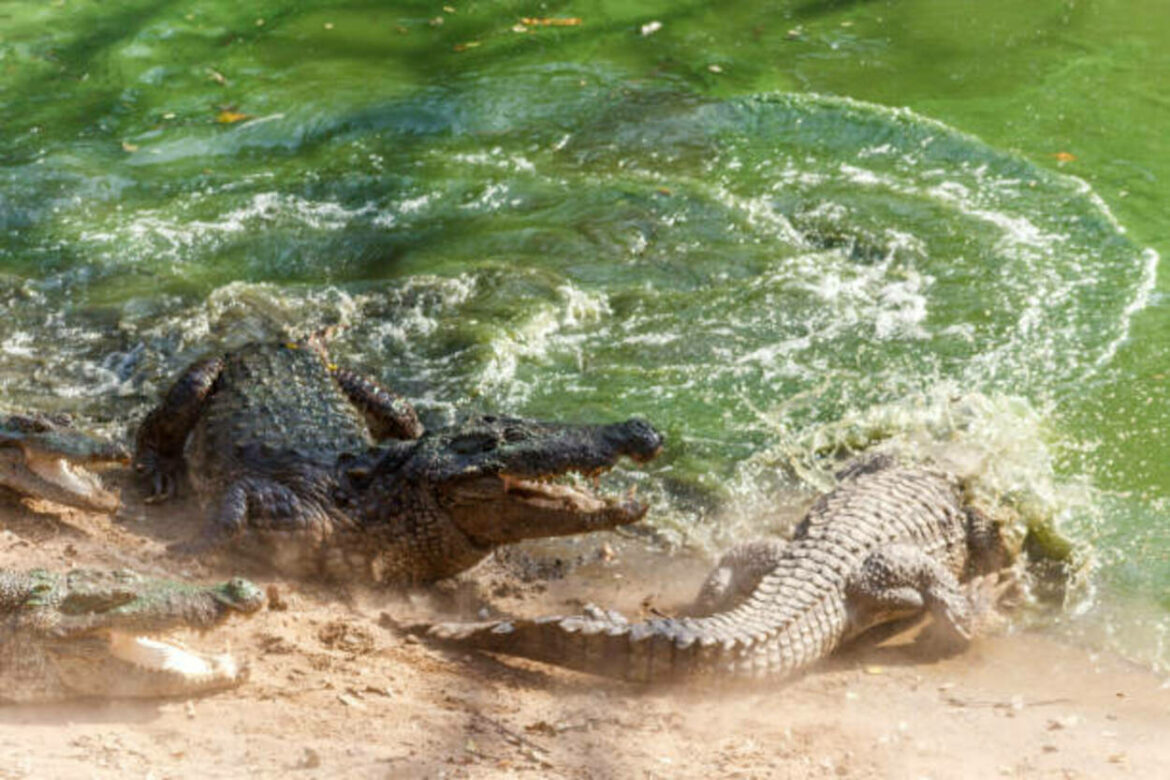 Giant reptiles like gharials, crocodiles, and alligators are intriguing creatures. These are carnivores that are capable of attacking people. Despite being aquatic creatures, they may also live on land. They have specific sensory organs that make them aware of various situations.

Though they share many physical characteristics but also exhibit clear distinctions, they all belong to the clan Reptilia and order Crocodilia despite coming from several families. More resemblances exist between the alligator and crocodile than the gharial, which differentiates due to an extended snout.

One of the most noticeable differences between them is their colors. Gharials have olive color, alligators are black and grey, and crocodiles are olive and tan in color.

The entire planet is home to these enormous reptiles. Alligators reside in Asia and North America, whereas crocodiles are found in Africa, Asia, Australia, and North America. Gharials are only found in India and its neighboring nations.

They are dangerous species, and you must take the necessary care before entering their habitat. I had explicitly seen crocodiles when I was in school. I was amazed by their skin texture.

Therefore, I have decided to share the distinction between these species in this article.

The word “Gharial” has been derived from the word “Ghara,” which Indians use for pots having a bulbous bump near the tip of their snout. The gharial is a morphologic crocodilian, the dominant creature among all surviving crocodiles.

The scientific name of this species is “Gavialis gangeticus.” The length of females is 2.6-4.5 m, whereas the males are 3-6 m. Thanks to their highly attenuated snout, rows of uniformly sharp teeth, and comparatively long, well-muscled neck, they are very effective fish catchers, referred to as fish-eating crocodiles. The weight of gharials is around 150–250 kg.

These reptiles most likely evolved from the northern side of the subcontinent of India. Their fossilized bones were discovered in the Sivalik Mountains’ Pliocene strata and the Narmada River Valley.

They are entirely marine crocodilians; they emerge only from the water to bask and construct eggs on wet sandbanks. They are currently seen living in rivers in the lowlands of the northern Indian subcontinent.

The alligator is the next giant reptile animal in this class. Alligators evolved approximately 53 to 65 million years ago.

They are divided into American and Chinese alligators. The United States’southeastern region is home to the larger of the two kinds.

The name “alligator” is likely an anglicized version of the term “el Lagarto,” a Spanish word for lizard. The alligator was known to early Spanish explorers and residents in Florida.

Alligators have potent tails that they employ during swimming and defense. Whenever they float on the surface, their eyes, ears, and nose are situated on the top of their long heads and stick out into the water just a little.

The lower teeth are usually hidden when their mouth is closed. They are carnivores and inhabit the margins of permanent bodies of water like lakes, marshes, and rivers.

Some Facts About Crocodiles

Crocodylia is an order of reptiles that includes aquatic creatures with lizard-like appearances and carnivorous diets. The closest surviving relative of birds, crocodiles, is a live link to the dino reptiles of prehistoric periods.

Crocodiles have tiny legs, clawed webbed toes, strong jaws, and numerous conical teeth. They possess a unique body structure in which the eyes and the nostril are above the water surface, while the remaining body is hidden under an aquatic region.

The skin of this animal is thick, rough, and plated, and the tail is lengthy and huge. Numerous crocodilian fossils from the Late Triassic Epoch were found 200 million years ago.

There may have been three significant radiations, according to fossil data. Only one of the four crocodile suborders has persisted up to the present.

Differences Between Gharial, Alligator, and Crocodile

After getting knowledge of these species, let’s discuss their differences.

The sensory pits of alligators and crocodiles on the lower and upper jaws help them find and catch prey by detecting changes in water pressure. The gharials and alligators have these sensors in the jaw region, while crocodiles possess them all over their bodies.

Crocodiles are found throughout the Americas, Southeast Asia, Australia, and Africa, whereas alligators are indigenous to Eastern China and the Southeastern United States. There are only gharials on the Indian subcontinent.

Crocodiles and gharials can stay longer in the open ocean because their salt glands also increase their tolerance to saline water. Alligators do spend a brief time in salty environments, but they love to live in freshwater areas.

Giant Reptiles: Can They Be Tamed?

It’s unusual to tame these animals as they are dangerous carnivore species.

Sometimes they live in the water so quietly that they don’t make people aware of their presence. These species, hunted by their skin, are great human killers.

However, if a person behaves sensibly and responsibly while in their habitat, they are unlikely to die at the hands of these reptiles. Therefore, necessary care must be taken when feeding them or entering their space.

These creatures may announce their presence by plunging into a swimming pool or devouring a family pet when humans get closer to their habitat.

Are These Species Conserved?

These giant reptiles are “critically endangered” or “endangered.”

Almost one-third of the 23 crocodilian species got this tag. The word “critically endangered” is used for those with an exceedingly significant chance of extinction in the wild, whereas the term “endangered” faces a very high risk of death.

The other 16 kinds are flourishing, thanks to countless conservation initiatives and anti-hunting laws that have kept them from going extinct.

The skin of these species is better conserved. However, those who survive are better cared for by the people who have the duty to feed them.

How Do You Know If A Person Is British Or English? (Differences Revealed)