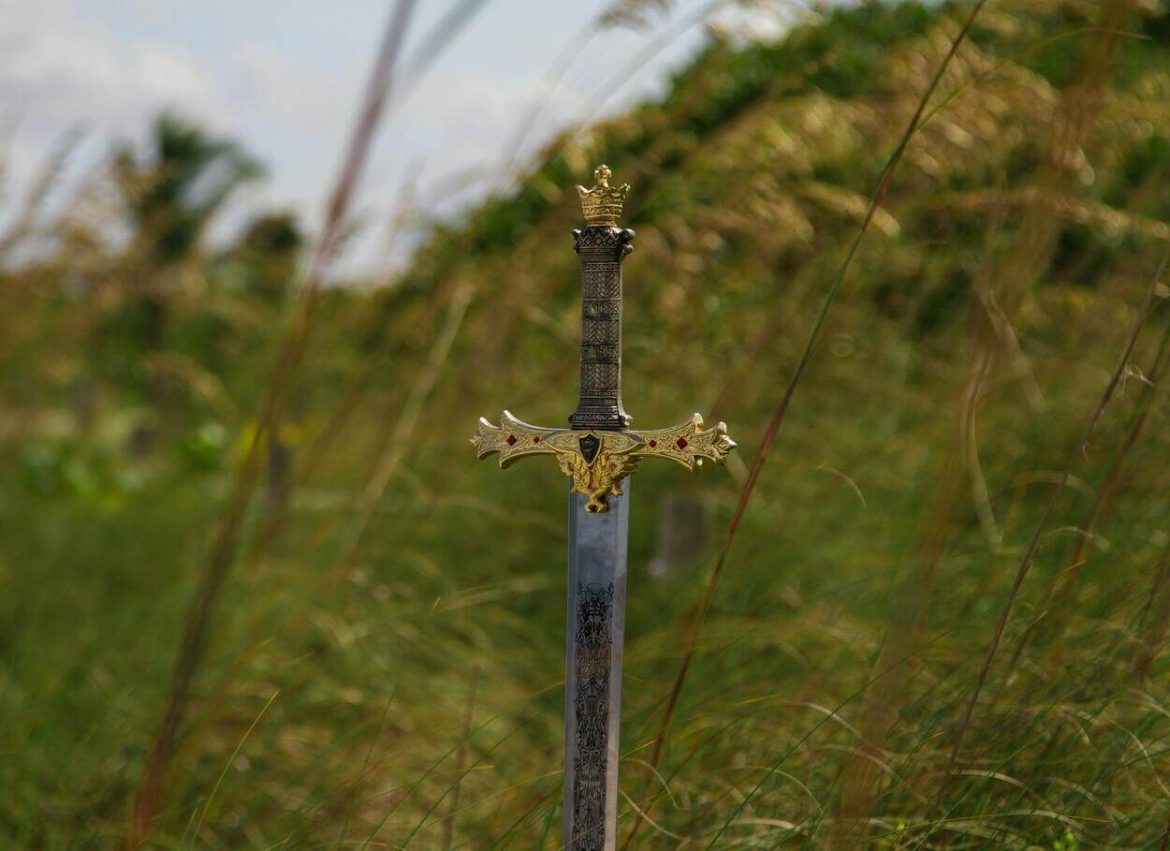 There are so many classifications of a sword and the terms often tend to overlap. Each of the swords originated in different time periods. They have unique features which are related to the different centuries.

Longsword, Broadsword, and Greatsword lie in the shape of the blade, length, and weight. If you’re someone who’s interested in renaissance martial arts of Europe and sword morphology, you might be wondering about their differences.

In this article, I’ll be providing a detailed account of the differences between a longsword, a broadsword, and a greatsword.

Both swords are divided by history. The main difference between longswords and greatswords is that a longsword was used in medieval Europe for hewing, thrusting, and slicing. It’s a two-handed sword to be used in combat. Some can also be used on one hand.

On the other hand, a greatsword is usually any straight-bladed and double-edged sword that is large enough. To wield it effectively it needs to use two hands.

Historically, armor designs improved in the 13th-century. Therefore, fighters started discarding their shields and used both hands on the sword to give more power.

They also made the blade longer to give more reach and a longer handle which would have room for two hands. This was the longsword.

A long sword also has a longer guard to protect the hands. They end in a sharp point which helps make them more effective in thrusting into armor gaps. An example of the longsword is the Albion Fiore Longsword.

The greatsword historically didn’t appear until the near end of the medieval period which was the 15th/16th century. Different names include Claymore, the Italian Spadone, and the German Zweihander.

These are normally as tall as the wielder and have space for three hands. They also have a blunted area, known as a ricasso, on the blade which the fighter can grab and use for half swording. This was an adaptation of the longsword and is considered to be a heavier version that could pierce through the heavy armor of that time.

The claymore is basically a type of longsword which was derived from 13th century Scotland. This weapon was over 5.5 inches and was said to have exceptional balance as well as durability. It was used by Highland Scots for over 250 years.

Here’s a video explaining the differences in more detail:

What is the difference between a longsword, a greatsword, and a broadsword?

Historical terms such as broadsword, longsword, and greatsword were used to label weapons that were similar in appearance but the difference was in their historical periods, cultures, and fabrication technology.

As it’s currently defined, a longsword is one which you generally use in two hands. It refers to straight, double-edged, cruciform swords that have long handles. These long handles help facilitate the use of two hands.

However, they can also be wielded in one hand. The synonyms for these types of swords include hand-and-a-half swords, Bastard swords.

On the other hand, a greatsword is a sword that is so large that it requires one to use two hands. Unlike longsword fencing, which is sharper and more controlled, it’s necessary for you to fundamentally adjust your fencing style with a greatsword. This is because it helps keep the blade moving.

Moving on, a broadsword, in reality, refers to the basket-hilted swords from the renaissance and not a cruciform one-handed sword. This design was established in the 2-3rd centuries by the Romans who used Spatha, a cavalry sword.

The best example of a broadsword is the typical 8th century Viking and Saxon swords as they have a wider blade and tip.

They’re designed for powerful cutting. Broadswords aren’t meant to be used for fencing or defensive actions, unlike longswords and greatswords. In later centuries, these swords are adapted into arming swords.

Moreover, a notable difference between these swords is their length and the way you wield them. A longsword has to be short enough that you can draw it from the hip.

Whereas, a greatsword is one that you can’t draw from the hip due to its large size. A broadsword is a single edge sword.

Take a look at this table summarizing the main differences between the three types of swords:

Is a broadsword better than a longsword?

It really depends on what and where you’re using the swords! Both swords were made for different time periods and different types of armor. They seemed to have worked pretty well in their respective times.

The main difference is that a longsword is the one that was used in Medieval Europe for slashing and thrusting. It was well-suited to be used two-handed in combat.

A broadsword, on the other hand, is a type of sword which has a wider cutting blade that does blunt damage as well as cutting damage. These were the pinnacle of Medieval European sword technology.

So basically, a broadsword was used for cutting rather than thrusting, unlike a longsword. Therefore, it was better to be used as a powerful cutting sword, while the longsword was better at thrusting, stabbing, and piercing.

A longsword also has a longer blade, which is why they’re not as wide as a broadsword. This provides them with more reach as compared to a broadsword. Their longer handle also gives them more space to be wielded by two hands.

How effective are longswords and greatswords in actual combat?

On a Medieval battlefield, longswords were considered the most effective secondary weapon. They weren’t as effective as primary weapons like spears, poleaxes, lances, pikes, and Billhooks.

However, they were versatile enough to be able to cut and thrust well. These could be held by the handle to use the crossguard as an improvised mace.

It must be noted that longswords can’t slice or stab directly through plate armor. The main idea behind using this sword was to get in between the gaps in armors and to use the cross guard to injure the opponent.

Against opponents who were unarmored, any good sword can be deadly. For this reason, longswords were common weapons used for self-defense by those who could afford them. They were easy to wear and were longer than any other kind of sword at the time.

On the other hand, greatswords are a renaissance weapon that was harder to wield but just as effective as superior weapons, such as polearms. These were also used as primary weapons.

Greatswords also couldn’t slice through armor or stab directly in it. However, they were effective because armor started to become less common.

A hit from the sword could still stun an opponent wearing the helmet. Bodyguards used to carry these as they were excellent against multiple opponents.

In actual combat, many believe that greatswords were denial weapons. This is because they weren’t good counters against pikemen as they couldn’t slaughter them. However, they could hold them back because these are seen as intimidating swords due to their large size.

In their respective time periods and in the right situation, both weapons, longswords, and greatswords, were very effective.

Can you use a longsword with one hand?

A longsword, which is often known as a hand and a half sword, is a double-edged European sword with a cruciform hilt. It can be used in either one or two hands.

Many longswords, for instance, those which were used in German and Italian longsword traditions, are almost always used in two hands. They would only be gripped with a single hand if they were mounted or were used to disarm an opponent.

There are many types of long swords. These include the Black Prince sword and the Bohemian broadsword.

A Black Prince sword has a grip of over 7 inches in length. It also has a hefty pommel which balances the robust, diamond sectioned blade and makes it equally comfortable in either one hand or two.

Whereas, the Bohemian broadsword has a flat tapering blade. The grip of this is only 5 inches long.

However, two hands can easily be accommodated as the backhand can fit comfortably over the pommel. This gives this sword great speed and maneuverability.

Is an arming sword A longsword?

An arming sword is generally smaller than a longsword. It’s probably more convenient to carry. If one is wearing less armor, then it’s more beneficial for them to be carrying a smaller shield like an arming sword.

This sword is a European one with a single-handed cruciform hilt and a straight, double-edged blade that is approximately 27 to 35 inches long. Its average weight is 2.5 pounds. It was used commonly from the 11th to 16th centuries.

An arming sword is more practical in a civilian context. It can easily be carried by someone who’s traveling unarmored between towns.

These were meant to be held in one hand. They can carry it as a self-defense weapon.

The arming sword was wrongly labeled as a broadsword by antiquarians. This is because Medieval swords were similar in blade width to the military swords of the day.

In conclusion, the main difference between a longsword, greatsword, and broadsword lies in their historical time periods. A broadsword was established and used in the 2nd to 3rd centuries.

Whereas, a longsword was used in the 13th century. A greatsword, on the other hand, was used as a primary weapon in the 15th to 16th centuries.

I hope this article provided you with all the answers regarding the three swords!

SWORD VS SABRE VS CUTLASS VS SCIMITAR (COMPARISON)

WHAT IS THE DIFFERENCE BETWEEN C AND C++?

WHAT’S THE DIFFERENCE BETWEEN AN M4 AND AN AR-15?

Creme Or Cream- Which One Is Correct?

Carnage VS Venom: A Detailed Comparison