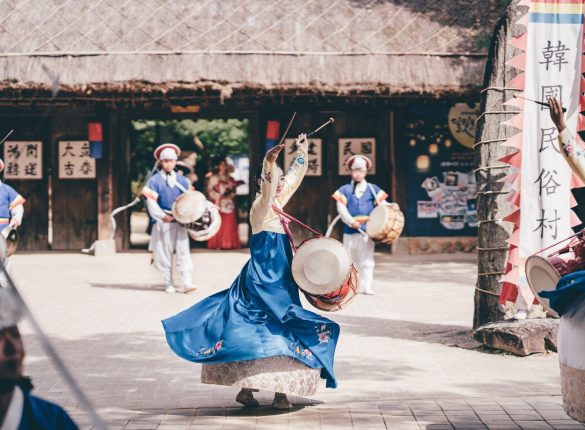 Every culture has its own style of clothing which is considered ethnic clothing now, only to be worn on special occasions as western clothing has spread its roots in almost every country. Three of the many cultural clothing that we will talk about are Chinese Hanfu, Korean Hanbok, and Japanese Wafuku.

Hanfu written in simplified Chinese as 汉服; and in traditional Chinese as 漢服, is the traditional styling of clothing which was worn by the people known as Han Chinese. Hanfu consists of a robe or a jacket which is worn as the upper garment and a skirt which is worn as a lower garment. A Hanfu includes many other things than just a jacket and a skirt, it includes accessories, like headwear, jewelry (yupei which is a jade pendant), traditional handheld fans, footwear, and belts.

The Hanbok in south Korea and Chosŏn-ot in North Korea is the traditional styling of clothing in Korea and the term “hanbok” itself means “Korean clothing”. The hanbok consists of the jeogori jacket, baji pants, chima skirt, and the po coat. This basic structure was designed to make it easy for people to move and to this day, this basic structure remains the same.

Hanbok is worn at formal or semi-formal events, like festivals or ceremonies. The South Korean Ministry of Culture, Sports and Tourism established a day in 1996 called “Hanbok Day” in order to encourage citizens of South Korea to wear the Hanbok.

The first difference between these three cultural clothing is that Chinese Hanfu is still worn by the Han Chinese, but Korea and Japan wear their traditional clothing Hanbok and Wafuku respectively for important events, like weddings or ceremonies only.

If we talk about the difference in designs, the collar of Hanfu is of Y or V shape, while the collar of Hanbok is usually V-neck with a wide bow tie. The upper outer garment of a Hanfu dress is attached to it, whereas the upper outer garment of Hanbok is outside which covers the skirt and the hem is wide and fluffy. the design of Wafuku is quite different compared to Hanfu and Hanbok. The Wafuku is of T shape, wrapping the front garment with square sleeves and a rectangular body, it’s worn with a wide sash (obi), zōri sandals, and tabi socks.

What is a Chinese Hanfu?

Hanfu is a traditional clothing of China worn by Han Chinese. It consists of a robe or a jacket as the upper garment and a skirt as the lower garment, in addition, it includes accessories, like headwear, belts, and jewelry (yupei which is a jade pendant), footwear, and handheld fans.

Today, Hanfu is recognized as the traditional clothing of an ethnic group called Han ( The Han Chinese is an East Asian ethnic group and nation native to China), among young Han Chinese of China and the overseas Chinese diaspora, it’s experiencing a growing fashion revival. Following the Han dynasty, hanfu evolved into many varieties of styles by utilizing fabrics. Moreover, the traditional clothing of many neighboring cultures was influenced by Hanfu, such as the Korean hanbok, the Okinawan ryusou, the Vietnamese áo giao lĩnh, and the Japanese kimono.

Women’s clothing accentuates the natural curves by wrapping the upper garment lapels or binding with sashes at the waist. Factors, like beliefs, religions, wars, and the emperor’s personal liking played a huge part in the fashion of ancient China. Hanfu encompasses all the traditional clothing classifications of more than three millennia. Every dynasty has its own different dress codes which reflected the socio-cultural environment of the times, Additionally, each dynasty favored certain specific colors.

What is Korean Hanbok?

In South Korea, it’s known as hanbok and Chosŏn-ot in North Korea. The hanbok is the traditional clothing of Korea and literally, the term “hanbok” means “Korean clothing”. The hanbok traces back to the Three Kingdoms of Korea (1st century BC–7th century AD), with its roots rooted in the people of northern Korea and Manchuria.

The hanbok’s early forms can be seen in the incredible arts of the Goguryeo tomb mural, the earliest mural painting dates to the 5th century. From this time, the structure of hanbok consists of the jeogori jacket, baji pants, chima skirt, and the po coat, and this basic structure was designed to provide ease of movement and integrated several motifs of shamanistic nature, moreover the features of hanbok remain relatively the same to this day, however, the hanboks which are worn today, are patterned after the Joseon dynasty.

What is Japanese Wafuku?

Is hanfu and hanbok the same?

The first difference is that the hanfu and hanbok are traditional clothing in China and Korea respectively. Moreover, hanfu is still worn by the Han Chinese, while hanbok is worn by the Koreans only during important events.

The Hanfu design: the collar of Hanfu is of Y or V shape and the upper outer garment of the dress is attached to it and the length of the top is longer compared to the Korean Hanbok. Moreover, these traditional clothes are straight down, this style is referred as “being upright” as it was a message from the ancestors of China that they delivered through the designs. Hanfu come in cold hues, such as blue or green, as the tradition taught them to be humble.

The Hanbok design: usually the collar is V-neck with a wide bow tie and the upper outer garment of the dress is outside covering the skirt and the hem is wide and fluffy. In addition, the length of the top is much shorter than Chinese Hanfu. The shape of the Hanbok is of conical shape as the modern bubble skirt and it comes in vibrant colors with simple patterned lines and without pockets. These various hues of the colors symbolize a person’s social position as well as marital status.

Is hanbok inspired from hanfu?

Hanbok was inspired by the hanfu, but most people claim that it was copied which isn’t true. Both of them have their differences in significance as well as the design.

Here is a video that explains how Hanbok isn’t a copy of Hanfu.

Along with Korean hanbok, other neighboring countries were also inspired by the traditional clothing of China called hanfu including the Okinawan ryusou, the Vietnamese áo giao lĩnh, and the Japanese kimono.

Despite the fact the hanbok was inspired by hanfu, both have great differences between them, and here is a table for those differences.

Is Wafuku the same as Kimono?

The term “Kimono” covers the whole sense of clothing and Wafuku is used to differentiate Japanese clothing from other clothing.

The word “Kimono” has two meanings, the first meaning is Wafuku and the second meaning is clothing. When a mother says to her naked child “wear Kimono”, she basically tells her child to cloth himself/herself. “Wear kimono” can mean clothing or the traditional clothing of Japan, it depends on the generation of the listener as well as the dialect that the listener uses.

For instance, Chinese hanfu is still worn by the Han Chinese, and Korean wear their traditional clothing called hanbok on the important events, like weddings or new years etc.