Home LifestyleCulture What’s The Difference Between A Minotaur And Centaur? (Some Examples)
CultureLifestyle

What’s The Difference Between A Minotaur And Centaur? (Some Examples) 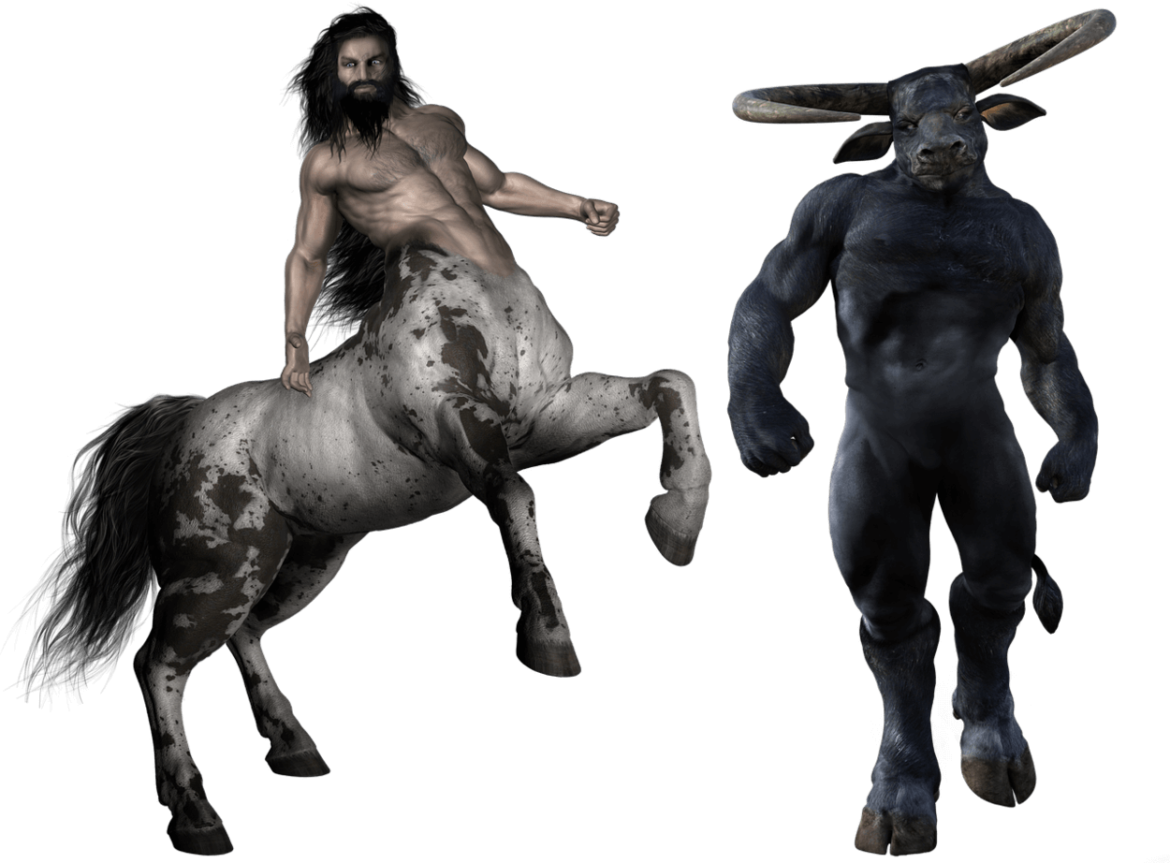 If you’re interested in Greek mythologies, you have probably heard about the mythical creatures like Minotaur and Centaur. A pair of half man half beast creatures whose minds are of beast and man, fighting ferociously against each other.

Centaurs and minotaurs both have mysterious origins and mixed lineages. Neither fit the description of normal parentage as they have a human parent and an animal or fantastical parent.

However, there are some significant differences between them.

They differ in one crucial regard: Minotaurs are half bulls, and Centaurs are half horses. The Minotaur is also typically much more animal-like, while the Centaur is much more human-like. Moreover, the Minotaur lives alone while Centaurs live in clans.

Let’s indulge in details of these two mythical creatures.

What Is a Minotaur?

According to Greek mythology, the Minotaur had a man’s body and a bull’s head and tail. Minotaur was the son of Cretan Queen Pasiphae and a majestic bull.

Minotaur comprises two ancient Greek words: “Minos” and “bull.” Hence, the Minotaur’s birth name is Asterion, which in ancient Greek means “starry one.” This may suggest an associated constellation: Taurus.

What Is a Centaur?

Centaurs are mythological creatures that have the head, arms, and upper body of humans and the lower body of horses.

Greek mythology describes the centaurs as the offspring of Ixion, the human king who fell in love with Hera, the wife of Zeus. By transforming a cloud into Hera’s shape, Zeus tricked Ixion. Nephele, the cloud for which Ixion bore his child, gave birth to Centaurus, a monstrous child who lived in the forests.

They were wild, lawless, and inhospitable creatures ruled by animal passions, slaves of the wild. The centaurs were created as a folktale combining wild mountain dwellers with savage forest spirits in half-human, half-animal form.

Examples of Minotaur And Centaur

There was only one Minotaur, according to the Greek mythologies. His name was the Minos Bull. As for Centaurs, many of these creatures are mentioned in the Greek mythical tales. Some of them are;

The Difference Between Minotaurs and Centaurs

Minotaur and Centaur are hybrids created due to the union of a human and animal. This is the only thing that makes them similar to each other. Apart from that, they’re pretty different.

To simply it for you, here’s a table of differences between Minotaur and Centaur:

Why Are Minotaurs Always Angry?

Minotaur was banished to the complicated Labyrinth of a maze to live out of sight of human civilization. His only food source was 14 humans, including seven males and seven females, sent into the maze as a sacrifice.

The scarce food and the constant banishment to living his whole life alone made him angry. He became untamed. He was punished for the sin of his mother and her husband, King Manos. He was, later on, killed by the Asterius.

To know more about Minotaurs, here’s a short video explaining everything about them:

Did Minotaurs Exist In Real Life?

According to some theories, you can believe that the events about Minotaur are real. However, most people consider it only simple folklore. Even if the Minotaur, King Minos, and Theseus of Athens existed, we couldn’t know for sure.

What Is a Female Centaur Called?

The name knows the female centaurs of Centaurides or Centauresses.

It’s only rarely in written sources that the Centaurides appear, but they are frequently depicted in Greek art and Roman mosaics. Hylonome, the wife of Cyllarus the Centaur, appears in literature most frequently.

Centaurides are depicted to be very beautiful in physical appearance, irrespective of being hybrids.

What Are the Different Types of Centaurs?

You can find various kinds of centaurs in different Greek pieces of literature. Some of them include:

Apart from these, you can find many more kinds of centaurs depending upon the animal counterpart of the hybrid.

Is Centaur Good Or Evil?

You cannot call centaurs evil. However, you cannot consider them good either.

They’re mischievous and rowdy creatures who don’t like to follow any rules. You can call them wild, uncivilized, and untamed.

Centaurs aren’t technically immortal, as you can witness in many Greek tales when they got slaughtered during wars between tribes. However, some people consider them mortal in the sense that after the death of Chiron, Zeus makes him immortal by transforming him into a constellation named Centaurs.

Do Centaurs Have Two Hearts?

Centaurs are believed to have two hearts. One is in their upper body, and the other is in their lower body. You can consider these hearts to be triple the size of the average human heart. Both of their heart beat together in a slow and regular rhythm.

What Is The Centaur With Wings Called?

Centaurs are known to be a follower of the God named Dionysus. He’s commonly known as the God of wine. Due to their God’s characteristic nature, they are rowdy and boisterous beings. The ones who don’t like to follow the rules. Moreover, they’re known to be governed by their bestial instincts.

What Are the Major Cultural Differences Between the United States East and West Coasts? (Explained)

What Is the Difference Between a German President And a Chancellor? (Explained)