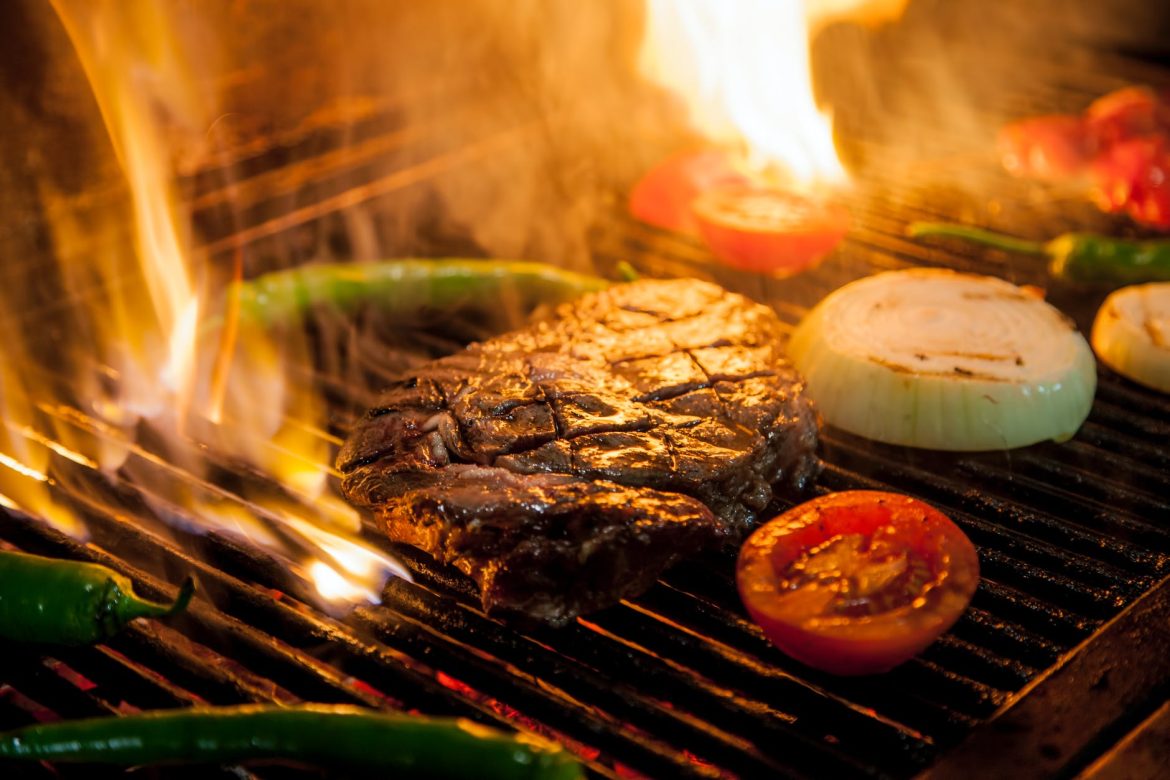 A blue and black steak is a Pittsburgh-style steak, whereas a blue steak refers to the first stage of a well-cooked steak. It is heated swiftly to a very high temperature, so it remains rare or raw from inside and charred from outside. The quality, rareness, and charring amount vary depending on how you cooked it according to your taste.

Interestingly in Pittsburgh, they don’t call it Pittsburgh steak, rather black and blue. The term Pittsburgh rare is used for steak in parts of Eastern Seaboard and the American Midwest. In other places, this sear cooking process is known as Chicago-style rare.

Blue steak is already a famous steak style offered in many good steak houses. It is raw, mainly in the middle, with only the outside charred to a bit of a crisp. Bring rare into the equation; it is black and blue but not charred to a crisp. Just grilled regularly.

If you’ve always wondered what black and blue steak is, wonder no longer! I’ll explain what it is and the origins of the term Pittsburg and how to cook it at home on the grill because both types need the same techniques―to cook a slice of meat raw from inside and well done from outside.

Moreover, I’ll discuss which steak cuts are best for black and blue steak and which ones you should not use for Pittsburgh steak.

History of Black and Blue or Pittsburgh steak

The black and blue steak got its name Pittsburgh from steel mill industries around Pittsburgh.

The worker at the mill needs high-calorie food to perform heavy work. But they only have 30 minutes to have lunch. That’s when they came up with the fast-cooking steak idea. They used to heat blast furnaces over 2,000 °F (1,100 °C) and cooked their steak on this sterile furnace. Due to the high heat, it takes only a few minutes to cook both sides. The steak would turn out raw from inside but well cooked and churning from outside.

That’s how black and blue steak originates from the region’s steel mills.

It is referred to as Pittsburgh in many restaurants when you order one except the charr cooked exterior, no matter the internal temperature.

Well, we are not 100% sure if this Pittsburgh-style steak story is true, but I sure hope it is because of how clever!

What does Black Steak mean?

Black steak refers to Pittsburgh-style steak. It is charred from the outside and medium cooked from inside.

Achieving the black steak is simply a case of cooking cold raw meat under high temperatures for a brief period. It is just cooked enough to get wholly churned outside.

By maintaining internal temperature, the steak remains medium-rare from inside. You will see the inside is primarily cool (110F)

The color black you see is standard, which happened because of the oxidation process. Due to oxidation, chemical changes occur in myoglobin (iron- and oxygen-binding protein). This usually occurs when beef is stored in the refrigerator.

What is Blue Steak?

Blue or also otherwise known as Bleu, is a very rare steak. It is a mark of French tradition. It has a cool red center and a well-seared exterior.

Here are the stages of steak doneness:

The center of the meat is kept soft and cool (80-100F). The blue color is achieved by grilling the steak on a medium flame for a short time on each side.

The extra rare steak is called blue because it boasts a purple or bluish color. In an air explosion, hemoglobin gets oxygenated, and the blue color changes into a red one.

The initial “blue” isn’t solid; it’s bluer, as in not the bright red that the meat becomes when it starts cooking. White meat has less myoglobin and more.

What does it mean when you order a Steak Black and Blue?

How to Cook Black and Blue Steak?

Black and blue steak have to be done on an open-flame grill. You have to ensure that the flames are rising above the grates on the grill. You can not achieve the Pittsburgh-style steak on a cooktop or a pan because it will take too long to get char while staying raw from the middle.

Blue and Black steak are cooked on the hot flame to make it soft from inside and churned from outside. when the steak can be brought to within 1″ of the heat source (850 degrees F.)

So first and foremost, you need to crank your grill on the hottest flame it can go and allow it to hold the highest temperature for about 8 to 10 minutes before cooking.

It is easier to cook a black and blue steak using cuts of meat like New York Strips or ribeye.

You can quickly fabricate your cuts of beef to keep more fat on it. You can either cut fat and place it around the steak or trim the meat fat and set it aside in your freezer.

Meat fat is beneficial in achieving the Pittsburgh-style steak. It breaks down pretty slowly and drips over, which causes lots of flames and fire, which help you accomplish the char quickly.

Meat like filet mignon or lean cut needs more fat so what you can do if you are using one of these meats is to use butter. But the problem is the butter melts and gets cooked really fast on the grill. You can make sure to freeze the butter before you cook it. So when you put your meat on the grill, set the butter around and on the meat in the same manner as you would put fat around the meat. This will cause some crazy flames and cook a great black and blue steak.

If you want to try the black and blue steak, then avoid the following cuts:

The target internal temperature range for blue steak is between 115 °F and 120 °F.

It is less than 115 °F, and it’s raw and will be cold—over 120 °F, and we’re getting into ‘rare‘ territory, not blue. Temperature is essential in achieving a blue steak.

Get a step further and put a lid on meat for getting an insanely deep dark char.

Once you season your steak and add butter or fat around it, put a large grill lid or cast-iron skillet upside down. This step will ensure your meat gets burned, as we call it Pittsburgh style.

Here is the nutrients value of Blue and Black Steak:

You will need the following ingredient for this recipe:

Here’s the step by step process to cook black and blue steak at home:

Is it safe to eat Blue Steak?

The raw steak might sound unpleasant to some, but it is perfectly safe to eat if cooked properly.

The key to perfect blue steak is sear–searing kills bacteria from the meat’s exterior. Bacteria can never be inside the steak; high flames and heat exposure on the outside of the steak is all you need.

The crucial part is to cook the top, bottom, and sides of the meat properly

Watch this video to learn more about whether rare steak is safe to eat or not?

The main thing to remember is that black and blue steak is seared and grilled over high heat for a short time.

Top Steakhouses know better what black and blue steak means. They are not different steaks, but one black refers to chur exterior and blue refers to raw interior.

Medium rare, on the other hand, is an extra steak. It is cooked with a nice red color from the inside surrounded by dark pink color.

To view the summarized version of this article, click for the web story here.

Where We Were VS Where Were We: Definition