Home LanguageGrammar Into VS Onto: What Is The Difference? (Usage)
GrammarLanguage

Into VS Onto: What Is The Difference? (Usage) 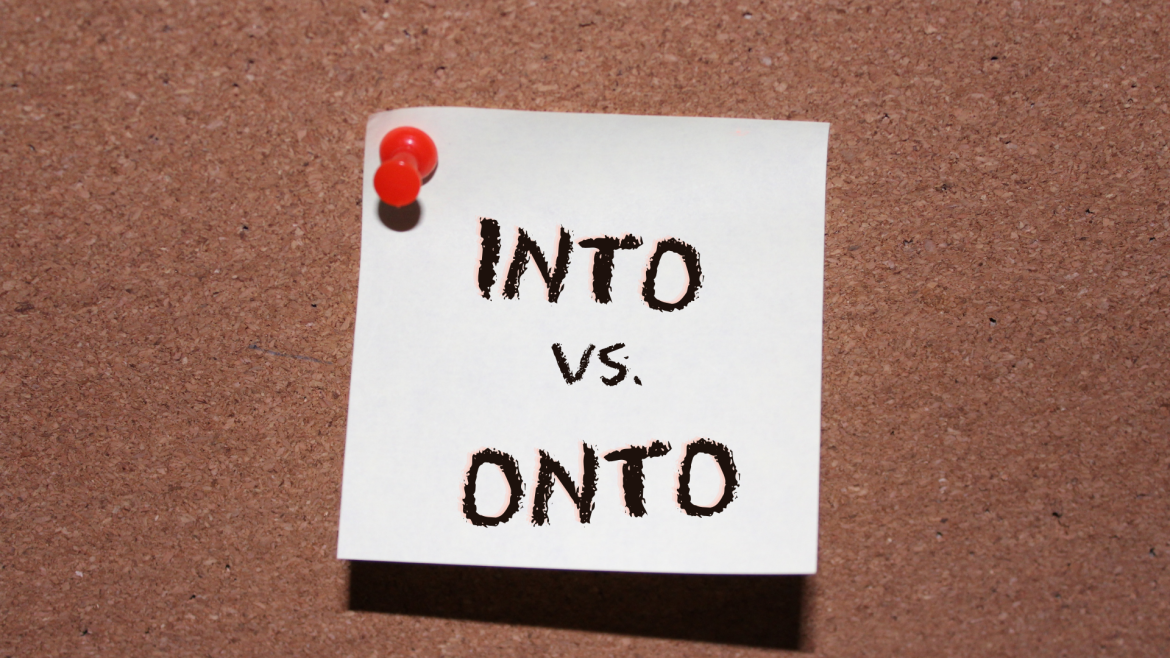 Describing the location of either any place or object is a thing we all often do. Words that we use to describe the position or placement of any object, place, action, or living thing are referred to as prepositions.

‘Onto’ and ‘into’ prepositions seem to be similar in spelling and pronunciation. Despite, their similarities both the prepositions have unique meanings and convey two different messages.

Take a look at how the word into is used in this example: “After observing danger nearby, the cat quickly jumped into the bucket.”

Meanwhile, here’s how to use onto in a sentence: “The hungry cat jumped onto the table to get a piece of meat.”

This is just one major difference between into and onto. So, read till the end to know the proper usage, differences, and facts about the words.

What does the word Into mean?

The words in and to are spelled jointly to form into. It is a preposition that indicates a specific direction, motion and tells that an action is being performed.

The word is used to express movement or action that results in something or someone being enclosed or surrounded by something else.

A simple example of the word into would like this: “After seeing a dog outside, Jack quickly ran into his house”.

The word into is also used as a function word to indicate entry, introduction, or insertion of someone or something in another thing.

For your clarification here is an example: “The robbers came into the house through the back window”.

In some cases, the word into does not involve a sense of within—instead, it describes some kind of transformation or mutation.

Take a glimpse of it here: “The filthy water was transformed into drinkable water after going through the process of purification”.

These are the other words that can be used instead of into according to the sentence:

What do you mean when you say Onto?

The word onto is a preposition that is most commonly used to describe movement over a particular surface.

Onto is used to describe the movement or action on the surface of any object. It’s also used with a verb that donates the movement.

A simple example of the word onto can look like this: “He exited the train while stepping onto the platform with a pleasant smile on his face.”

The word onto also conveys the meaning of either something or someone reaching the top of any object. Let me give you some examples:

“He climbed onto that mountain.”

Or, it might define the meaning of the word upon. Take a look at this: “As soon he jumped onto the cart, we started to move.”

The word onto is also used to notify someone about anyone who can be a source of a problem or challenge. Here’s how you can use it in a sentence: “Your competitors are having a joint meeting, they must be onto something”.

The word onto can also indicate what is held firmly or what someone is holding firmly. Take this one as an example: “The family picture was held onto the wall by a beautifully decorated frame.“

Into vs. Onto: How can we differentiate?

These prepositions might sound similar to you but they are entirely different. Let’s deep dive into how these two differ from one another and how we can distinguish their correct usage.

Although the word into and onto seem similar but they are not the same. Both words are different from each other.

Major differences can be seen in the table below.

The word into is used to indicate action, insertion, entrance, or transformation of anything.

Here’s an example: “The car crashed into the tree.”

Whereas, the word onto indicates movement over a surface or to notify someone about something.

You can take this one as an example: “The boy climbed onto the tree to get some mangos.”

Words into and onto also have different synonyms and antonyms.

Into vs. Onto: What is the correct usage?

As we are done with the differences now it is important to know how to use into and onto in the sentence.

There are different usage of into and onto depending on the sentence but let’s first talk about similar usage. Both the words are used to describe the destination, which means where something is going.

Simple usage of into goes like this: “The car drove into the underground parking.”

Using the word onto can be like this: “The battle somehow climbed onto his shirt”.

In both examples, the words onto and into are describing the destination of different objects.

Still confused? Here’s a guide we have for you on when to use these two prepositions.

Is In to and Into the same?

The words in to and into are pretty similar in terms of spelling and pronunciation but they both are different in usage and do not describe the same thing.

The word into usually used to answer questions starting from where. On the other hand, the word in to is used in short answers or statements. Sometimes the word in is paired with a to form a phrasal verb.

Selection of correct words is very important as they convey our message. Incorrect usage of words can confuse or puzzle the listener and can create misunderstandings.

For correct usage of words, one must know and master the fundamentals of grammar and language.

Although preposition seems to be a trivial part of speech, in reality, it holds a very significant position as it conveys position or placement. The words into and onto are two distinct prepositions that have different usage and meanings.

Whether it be into, onto, or any other preposition, one must have proper knowledge of their meanings and usage in order to make sentences sound meaningful.

A web story that discusses the differences can be found here.

What Is the Difference Between Jp and Blake Drain? (Explained)

For Me VS To Me: Understanding The Difference